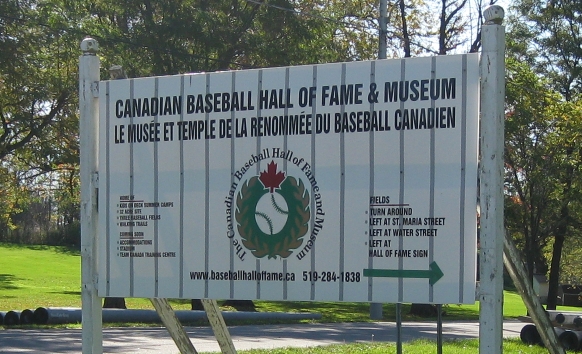 On Thanksgiving weekend I made the trek to St. Mary’s, Ontario to visit the Canadian Baseball Hall of Fame.  Much different than its American counterpart Cooperstown (home to the National Baseball Hall of Fame),   St.  Mary’s is a tiny picturesque rural community with not much going on at all.  The Hall itself isn’t much to look at: 4 rooms on the main floor of a converted farmhouse.  But don’t let its small stature fool you – the experience is still thrilling.

The Canadian Baseball Hall of Fame has existed since 1983 and is home to 90 inductees.  Originally located in Toronto, the Hall moved to St. Mary’s in 1989 and has remained there ever since.  The first organized baseball game (or at least resembling one) in Canada took place in Beachville, Ontario – a community that borders on St. Mary’s.  The town itself is home to one of the first organized leagues in Canada.  Admission is $7.50.

The Hall is divided into 4 separate rooms.  Although they are small rooms, they are packed to the gills full of stuff.  The first room features the Tip O’Neill award.  Named after the “Woodstock Wonder,” the James “Tip” O’Neill award is presented annually to the Canadian baseball player judged to have excelled in individual achievement and team contribution while adhering to the highest ideals of the game of baseball.

If you are a fan of our Toronto Maple Leafs article, you will love the first room in the Hall.  It is full of memorbilia from that Toronto baseball team that played in the International League from 1912-1967.  Membership certificates, team photos, signed balls from the 1950s Leafs, the 1960 Leafs, the 1962 Leafs, ’63 Leafs and ’64 Leafs,  and pictures of Maple Leaf Stadium adorn the walls.  There is even a section devoted to flamboyant owner Jack Kent Cooke.

Oh yeah… one thing about the Canadian version of the baseball hall is that you can touch almost everything. That includes original seats from Maple Leaf Stadium (adorned with original Maple Leafs jerseys), an incredibly old Preacher Roe model glove, Paul Quantrill’s old glove or Roberto Alomar’s old bat.

In the next room I learned about the Vancouver Asahi, a team I had never heard of before.  The Asahi were a popular team of Japanese Canadians that won 5 consecutive Pacific Northwest Championships in the 1930s.  However, following the Japanese attack on Pearl Harbour, the Canadian government interned everyone of Japanese descent and the Asahi never played again.  Quite a tragedy, really. 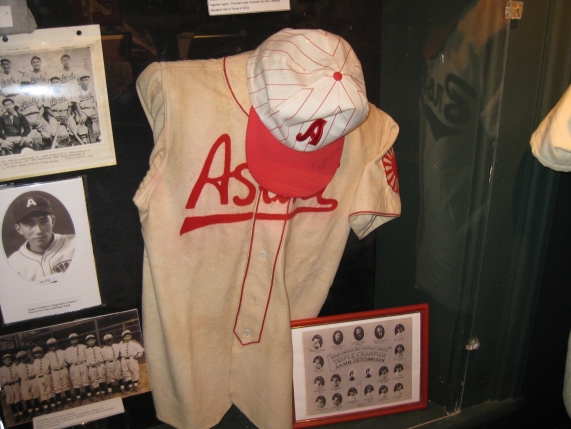 Moving from the first room to the next, there is a transition from Toronto Maple Leafs memorbilia to their counterparts the: Montreal Royals.  The Royals are notable for having been managed by Dodgers legend Tommy Lasorda and having had employed Jackie Robinson.  Photos of the 1952 and 1954 Royals (featuring a young Roberto Clemente) adorn the walls along with various Jackie Robinson artifacts.  There is also a spot reserved for the west coast’s Vancouver Mounties.

“Before he was sent back to Kansas City, Sonny [Brown] did make a little baseball history. That’s a story Buck O’Neil told kids in classrooms across America. He said the story was as important, in its own way, as the story of Jackie Robinson turning the other cheek. Sonny did not start either game against Detroit on a doubleheader Sunday, August 13. The Browns had already given up on him. Late in the second game, though, he was sent in to pinch-hit against pitcher Hal Newhouser, who would later be inducted into the Hall of Fame. Sonny was sent in so unexpectedly, he did not have a bat to use. He borrowed the bat of Jeff Heath, the team’s best slugger.

“Newhouser pitched, and Brown crushed a long drive to straightaway center field. The center-field fence at Sportsman Park was 428 feet away, and Brown’s drive smashed right off the number 4. Brown ran full speed, he ran angrily, and by the time the ball made it back into the infield, he had scored, an inside-the-park home run. It was the first home run a black man hit in the American League.

“When Sonny walked back to the dugout, nobody shook his hand. Nobody said congratulations. Nobody even looked his way. He sat down and then, Buck O’Neil said, Sonny Brown watched Jeff Heath take his bat, the one Sonny had used to hit the home run. Heath looked at it for a split second and then smashed it against the wall. Sonny Brown talked with Buck about that moment a lot – the moment when he watched pure hatred crashing against a dugout wall.”

Crossing over into the 3rd room there is a small hall where the plaques for the 90 inductees are located.  Remember Bill Phillips, the Canadian firstbaseman who inspired one of our first-ever posts? (a cleaner version can be found over at the Batter’s Box)  He’s here.  Goody Rosen? Yup he’s here too. Bobby Mattick? But of course.  Sparky Anderson, the great manager who cut his teeth with the Toronto Maple Leafs is here as well.  George “Twinkletoes” Selkirk calls this place home. There’s even a Canadian Prime Minister represented.  Recent inductee Dave Stieb? You better believe it. 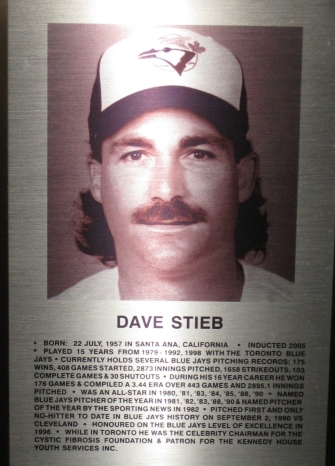 The third and fourth rooms are noticeably Expos and Blue Jays-centric, though Fergie Jenkins’ Cy Young award lives here.  These cubby holes are full of so many treasures that they would inspire Indiana Jones.  Highlights include seats from Jarry Park,  George Bell’s 1987 MVP ring, a single seat from Montreal’s Olympic Stadium, a Dave Stieb cookie tin (who didn’t have one of these in the 90’s?!), a World Series game-used Tony Fernandez glove, the Pearson Cup, a gaudy Back 2 Back World Series leather jacket, pictures of a young and sexy Anne Murray from the Blue Jays inaugural home opener, both 1992 and 1993 World Series rings, the home plate from the 1993 World Series, and a Thank You Cito ticket stub, among others.  There is also a section devoted to Canadian professional minor league affiliates, including the St. Catharines Blue Jays.  Even Paul Molitor’s 1993 World Series MVP trophy was on display, donated by the man himself.  What a stellar guy! 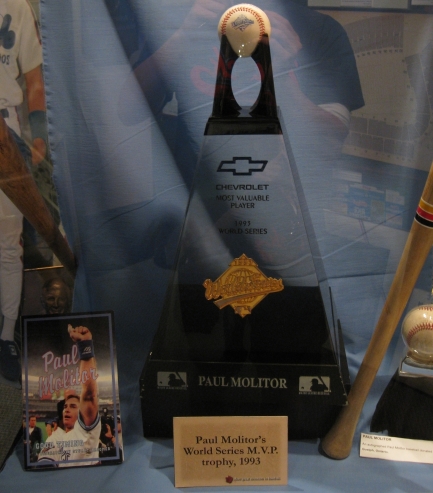 The Hall also makes available balls, bats and gloves for patrons to use should they feel inspired to “have a catch.” And it just so happens the Hall is situated next to 3 pristine and beautiful baseball diamonds. should baseball aficionados get the urge.  What’s even cooler is that the seats for all of the parks have been taken directly from Exhibition Stadium.  Nice touch!

The Canadian Baseball Hall of Fame may not be much to look at from the outside but it is a jewel on the inside.  It is a must-see venue for any baseball fan or Canadian historian.  The Hall also plans to move into a larger location – a local elementary school – pending funding, of course.  That’s great news for a museum already bursting at the seams with treasures.  Next summer make sure to make a visit to St. Mary’s a priority.  It’s the perfect day trip for when the Blue Jays are out of town.  You won’t regret it. 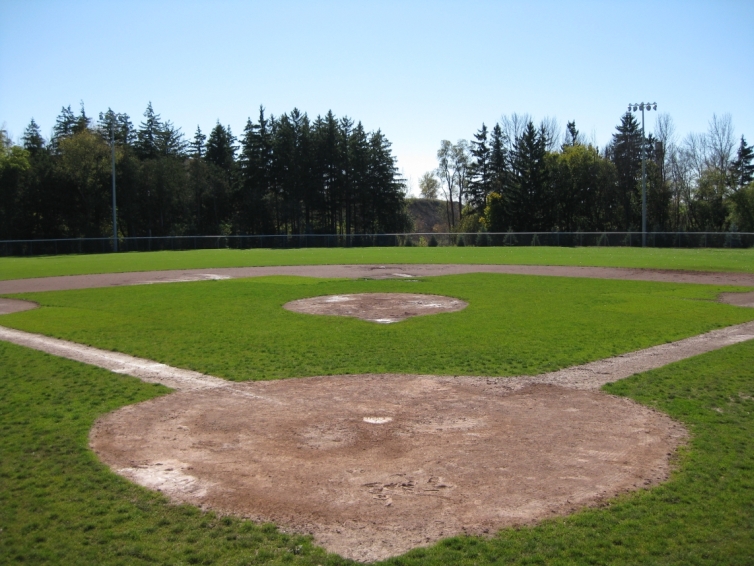 For more photos, have a look at my Canadian Baseball Hall of Fame Facebook Album.