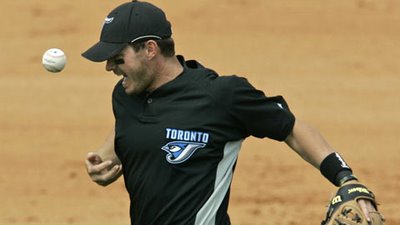 Much like my Gregg Zaun/Bengie Molina column, I am going to play GM with the Jays’ middle infield.

There are 2 things we know for sure. The first is that Aaron Hill is a solid second baseman. He is no O-dog (who is really?) but he fields well, he is capable of hitting .300 and scoring a bunch of runs. He began to show signs of some pop at the end of the season, posting a .523 slugging % in the month of September. Most importantly, he is cheap.

The second thing we know is that Russ Adams can not be the Jays starting SS come opening day. Why you ask? At some point this year Adams became haunted by the ghost of Chuck Knoblauch. As I see it, Adams had started to become afraid of making a mistake and I can see it every time he double clutches a throw before he air-mails it above Lyle Overbay’s head. He looks like he’s thinking more about the ramifications of what he’s doing, rather than simply playing with competitive arrogance that most stars (or at least competant shortstops) possess – the assumption that he will succeed. Not only that, he has let his defensive misgivings affect his hitting, barely batting above the Mendoza line and posting an OPS a hair over .600. Miserable stats to say the least. He needs to be buried in the minors until he can figure himself out. Will he make it back to the big leagues? Who is to say but I wish him the best, I just don’t want to see him in Toronto. 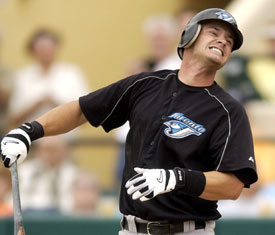 First things first, let’s be clear that there is no solution from within. Luis Figueroa and Sergio Santos are marginal players at best, and Ryan Roberts proved he is not near ready to play in the show.

So what we have is a gaping hole at SS. There has been talk about filling it with Julio Lugo of the Dodgers, a player the Jays were rumoured to have tried to acquire at the trade deadline. Apparently the 30 year old Lugo is seeking a 5 year $40 million dollar contract. This for a guy with a career line of 277/340/348 and he had a terrible second half for the Dodgers. For a team like the “small market” Jays with budgetary constraints (and an uncertain budget going into next season) and with multiple needs, I don’t think so.

As this year’s playoffs are reminding us, it is pitching and defense that wins championships. The New York Yankees drop $200mil on a payroll, sending the most fearsome lineup perhaps ever 1 through 9 and don’t make it out of the first round. Why? Because great pitching trumps great hitting almost every time. The Jays need to sign at least 2 starting pitchers with the likely departure of Ted Lilly and the realization that Josh Towers/Marcum/Janssen/Taubenheim etc. are all trash. They also need to keep Speier because, again, the teams in the playoffs that are winning have solid bullpens (Tigers what?). A couple of the mid-level free agent starters that could be had include Vicente Padilla, Gil Meche, Randy Wolf, Woody Williams. Maybe the Jays could land a Zito!!

So, as GM of the Jays, I would sign those 2 starters and Speier and pick up some guy off the scrap heap who can play defense behind the ground-ball inducing Roy Halladay and just get on base at a reasonable clip (Sorry John McDonald, you are a stud and I love you but… no). Perhaps Alex Gonzalez could be had for a bargain? It doesn’t matter really, the rest of the lineup can mash and if the Jays can solidify their pitching… they will be a force.

Am I crazy? Do the Jays need to make a run at A-Rod to play shortstop to win? What would you do?

P.S. Aaron Hill is a stud (with the ladies at least)