Wow.  What a miserable season 2012 turned out to be, eh?  The arm-shattering in the starting rotation was unprecedented.  The much-ballyhooed bullpen imploded early on.  Some players became famous (Edwin Encarnacion) and other players became infamous (Brett Lawrie).  Yet, in spite of the crushing disappointment of 2012, there were still some memorable moments and compelling stories. Without further ado, I bring you the top ten Blue Jays moments of 2012 – in no particular order.

1.   The Emergence of Edwin Encarnacion

Simply put, EE has been a stud in 2012.  Not only has Edwin come into his own offensively, but he’s also come out of his shell personality-wise.  Check out the Blue Jay Hunter’s The Evolution of Edwin Encarnacion’s Bat Flip for proof.  Edwin has also incorporated some sort of a weird T-Rex/Chicken Wing thing as part of his home run trot.  What’s the significance?  I have no idea.  But as long as he hits 40+ bombs a year, he can do whatever he wants.

Much-maligned Rajai Davis is often criticized for his defense (or lack thereof.)  In a game vs. the Yankees, Davis quieted the haters by making one of the most spectacular catches in Blue Jays history.  In my mind, it is even better than Devon White’s iconic catch up against the centrefield wall that started a phantom triple play in the 1992 World Series.

In mid-May, the headstrong Blue Jays third baseman, Brett Lawrie, threw a temper tantrum that exposed his lack of maturity.  Though it was cathartic for those Jays fans who would love to vent their frustrations vicariously through Lawrie, the incident was embarrassing for both the player and the franchise.

While Omar may not be a lock for the Hall of Fame, one thing is for sure:  he knows how to Party Rock.

5.  Jeff Mathis cuts down Elliot Johnson at the plate

This was an exciting play for two reasons.  One, the Blue Jays walked off with a win with the out at the plate.  Two, Jeff Mathis put on a clinic on how to hold one’s ground at home plate.  Part of the lesson was how to make the base runner’s face look like raw hamburger.  You can be sure that Elliot Johnson will not be returning to class for remedial work. Adam Lind starts the fourth triple play in the Blue Jays’ franchise history vs. the Kansas City Royals.  And you thought he was sleeping all the time.

Who would have thought there could be a rain delay at a domed stadium?

Remember how I talked about the mistakes that the young players made throughout the season?  This is one of them.  But it was funny.

9.  The Emergence of Casey Janssen

When Jays closer Sergio Santos went down with a shoulder injury, journeyman reliever Casey Janssen took hold of the ninth inning role and ran with it.  I shudder to think what might have happened to late-inning leads had Janssen not been there to shut the door.

On May 17, 2012, Yan Gomes became the first player from Brazil to play in a Major League game.  Gomes had a very solid debut, going 2 for 3 in a 4-1 win. With third baseman Brett Lawrie having to serve a three-game suspension for the aforementioned helmet-tossing incident, Gomes had an opportunity to state his case for a full-time job on the Jays’ big league roster. The next day, he homered off Jonathon Niese for the first home run hit by a Brazilian-born Major Leaguer. 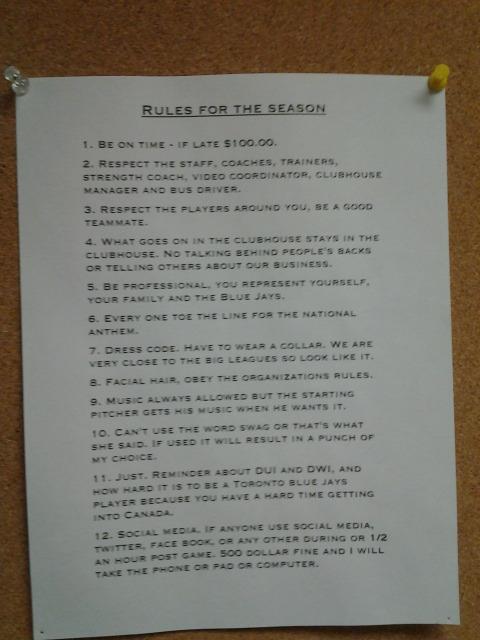 What were your favourite moments of the season?  Are there any egregious omissions? Let us know in the comments section below.