Last week Mop Up Duty reader Tight PP travelled to Texas to take in the first Blue Jays game of the season in Arlington vs. the Rangers.  Below is his story.

Deep in the heart of Texas for Opening Week for the second straight year.  Last year I stopped by Minute Maid for some National League play (which Early calls Intercounty League).  This time around it was Arlington for a peek at the new look Blue Jays.

On my last trip down to the Lone Star State I did not stop in Dallas area for more then the time it takes to scarf a Whataburger, but this time we spent four days in the Big D.

We started with a quick drive around the state.  Stopping to see the Texas Prison Museum in Huntsville, which is home to Ol’ Sparky, the electric chair that took the lives of over 300 inmates.  Huntsville also boasts that it’s home to seven prisons and the largest statue of an American hero.  A 77-foot tall statue of Sam Houston overlooks the highway at the south entrance to Huntsville.

That was followed by a quick stop in Houston and San Antonio.  The San Antonio River Walk is a must.  There are bars and Tex-Mex restaurants everywhere, all with patios along the river.  Also a must in the SA area is tubing, or toobin’ as they call it.  New Braunfels, just north of SA, is the place to be.  Check out Texas Tubes.  Basically you rent a tube and float down a river. The catch, you also rent a tube to carry your cooler full of beer.

After piling the miles on the rental we pulled into Arlington on April 5th for the season opener.  Arlington is smack dab in the middle of Dallas and Fort Worth, which is basically one large city with two centres.  So the ballpark is kind of in the middle of nowhere.  It is easy to access via car, however opening day parking was a huge pain. 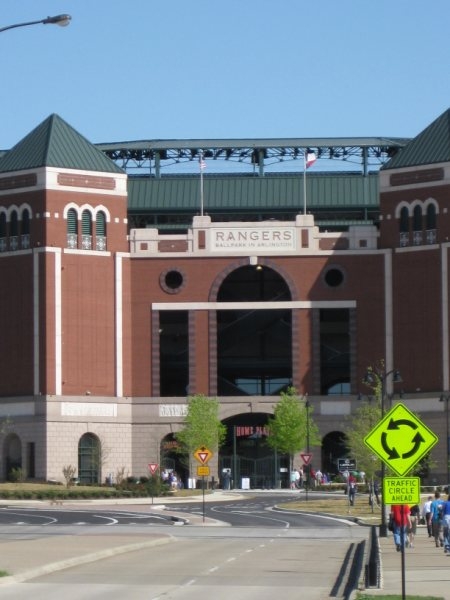 We ended up in the Six Flags parking lot.  The Rangers website sells parking passes along with tickets.  These are useless.  They do not guarantee you a spot, and anyone can just drive up and pay the $12 in cash, the same price as the pass.  Even though we were right beside the park 45 minutes before the game, we missed the first inning trying to find an empty lot.  Since there is nothing around the park, tailgating is popular. There were still many people driving in the back of their pick-ups while we hurried to our seats.

The Rangers Ballpark in Arlington is very different from any others I have been to.  It is basically laid out as a square.  In CF offices enclose the stadium. Behind the bleachers in CF is a kid’s area with whiffleball, pitching games, etc. There are two large team shops and a store that has custom or possibly game-used items. 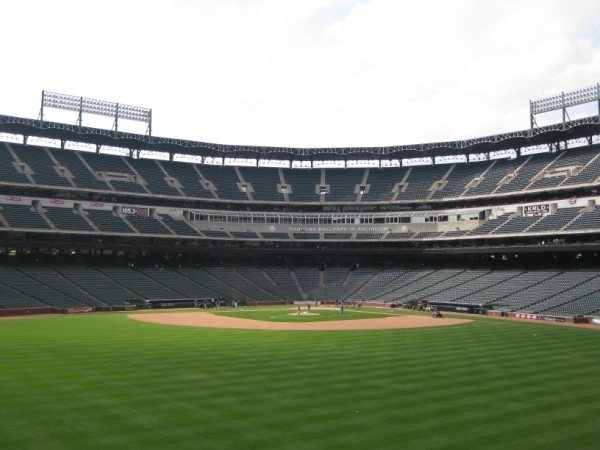 The concessions at the stadium were mostly standard, but I found a chicken fried steak sandwich.  I was not impressed.  The fries that accompanied it were soggy and gross.  I was not sold a beer with my “out-of-state licence” but they did take our passports at a later game.

I also recommend beer shopping at the “Beers of the World/Texas” concession as opposed to waiting for the beer guy in the stands.  The guy only carries Bud/Bud Lite, Coors Lite, and some other piss poor U.S. beers.  The beer stands carry Corona, Modelo, and Shiner.  Shiner is a great Texas beer.  It is dark in colour, but light and easy to drink even in the Texas sun.  Modelo Especiale is a Mexican beer that is great for a patio or the bleachers.

A little something Callum would love is the Ball Girls.  The Rangers have two young ladies who retrieve foul balls and play catch with the outfielders.  I did a little creep photography just for you.

At the Opener we made it to our seats after missing the first inning and two Blue Jay runs.  We found our seats on the right field foul line.  Very good seats with good sightlines.  The wall along the foul line gets higher as it reaches the home-run wall, so we were in row 8, but also two seats from the wall.  These seats were $50, and comparable to the $52 seats in Skydome.  The afternoon heat was not a problem as it was overcast for most of the game.

For the game on the 7th we sat high above the plate, 5 rows up in the upper deck.  $20 seats and a great overview of the play.  This was a night game and it was windy.  The temperature was 51F by the end of the game. It was not what I had come to the ballpark expecting, and I was a little uncomfortable in the later innings.

For the final game in the set we got $10 bleacher seats right beside the Jays bullpen.  We were maybe 15 feet from the pitchers warming up.  That afternoon there was not a cloud in the sky and we felt the sun pouring down.  It was not humid at all, and that was a huge difference to a similar day in Toronto. 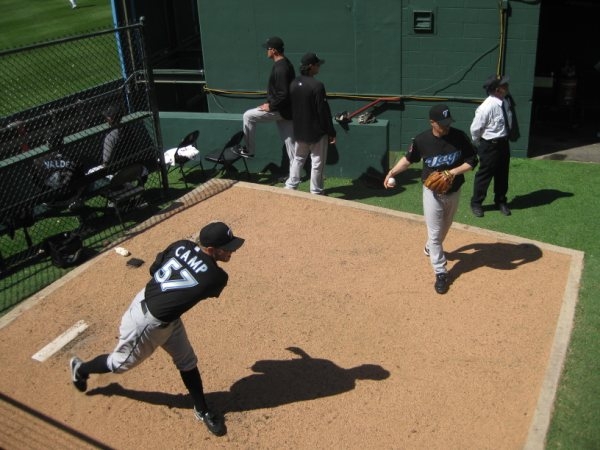 All around us were Ranger fans who did a little good-natured ribbing but, on the whole, were very friendly, all welcoming us to Texas and wishing us a good trip.  Also, there seemed to be a lot of transplants in Dallas.   Talked to guys from New Jersey and Chicago.

We did run into a couple of Jays fans: a family down from Vancouver to visit relatives; a guy from Red Deer down on business, but assured us he only came ‘cause the Jays were in town; and a group of 20-somethings from Niagara Falls, who frequently follow the Jays on the road.  Jenni got a Vernon Wells autograph, and when she told him we came all the way down from Toronto, he just said, “That’s a long way to go” in an monotone, expressionless manner.

My overall feelings about the ballpark in Arlington are not too impressed.  The location isn’t what I would prefer in a ballpark.  I like downtown parks.  But if you are into tailgating, this is for you.  The sightlines in our three seats were all very good. The scoreboards and video screens are all pretty small and oddly located.  The food selection was ho-hum. There is nothing that really wowed me with this park, however it is just fine for watching a game.  The park is not a must see/do, but if you are there to watch baseball it is just fine. 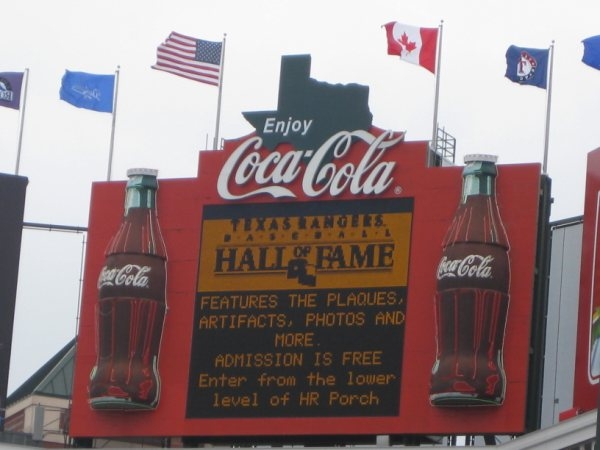 While in Dallas we stayed at a hotel on Commerce Street.  In the area we went to the Sixth Floor Museum, at the Texas School Book Depository.  It covers the assassination of JFK.  It is a really good museum.

A couple places we ate and drank were:

Also on Market St is Wild Bill’s Western Store.  It is right next door to Hoffbrau.  It carries a wide range of cowboy boots, and other clothing items, and souveniers.  The prices seem pretty decent, and check out the sales rack for some great finds.