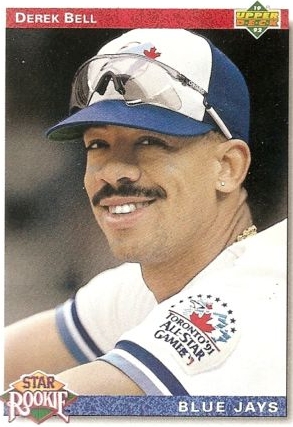 The Trenches were made up of seldom used bench players Derek Bell, Ed Sprague and Turner Ward. But don’t call them bench players because they didn’t ride the benches – they worked the trenches!

Sprague didn’t play much after being called up—he had only 47 at bats—but he and two other Blue Jay reserves, outfielders Turner Ward and Derek Bell, started something called the Trenches, a silly little rally routine that has enlivened the Toronto bench. They lay a towel labeled TRENCHES on the top step of the dugout, near the bat rack. Bell, the loader, pulls out a bat belonging to a Blue Jay teammate who’s about to hit. He passes the bat to Sprague, the exchanger. As the batter comes to the plate, the bat is handed to Ward, the shooter, who fires off an imaginary volley at the opposing pitcher. “If we need a big homer, like tonight,” Ward said Sunday night, “I turn the bat around and make it a bazooka.” The imaginary warfare may seem juvenile, but when one of the soldiers has to come into a game, his place is often taken by Toronto’s 41-year-old star, Dave Winfield. “He’s our commander in chief,” says Sprague. As so often happens in battle, it was the guys in the trenches who won Game 2.

Derek Bell explains the phenomenon of the 1992 Toronto Blue Jays clique known as “The Trenches.”