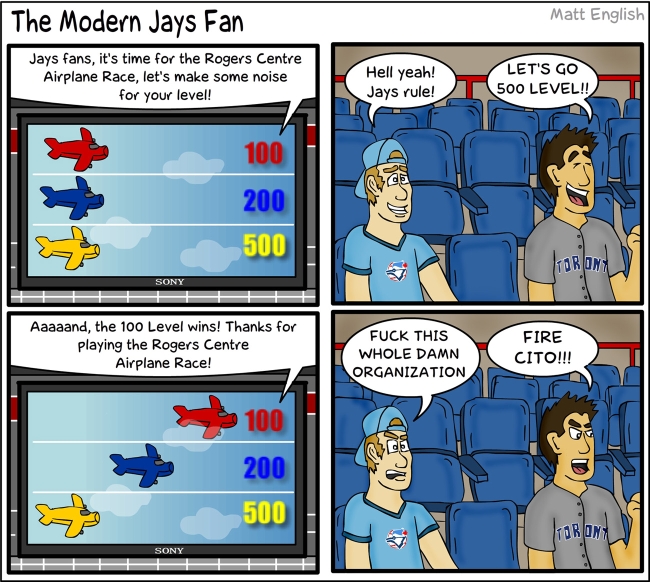 The comic above pretty much sums up my experience at the Jays games this labour day weekend.  I wouldn’t go into the nitty gritty details in a game review but it went down like this:

Friday I rolled into the dome and was treated to a Roy Halladay one-hitter. (Roy became just the 5th pitcher in the last 55 years to shut out the Yankees with at least 9K while giving up one hit or fewer).

I was on such a high from the previous night’s game that I thought I would roll by the RC for a double dip and see if Brett Cecil could “get the magic back“. He couldn’t and the team certainly didn’t. 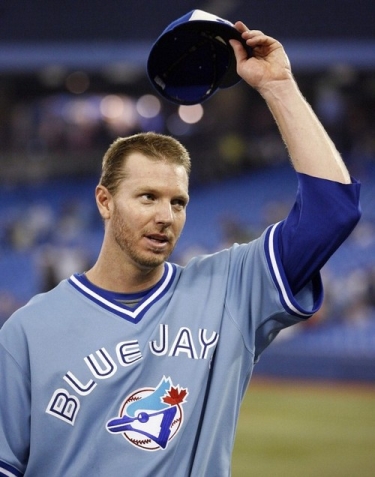 So let’s start with the Halladay start. I rolled into the RC sporting my freshest Gregg Zaun shirt out of respect for the dearly departed.  Imagine if he was still here – what a platoon we would have! First thing I did was hit the Jays shop and they have the best deal ever on: buy 1 jersey get 1 free and this includes free cresting!  I couldn’t pass this up so I grabbed a Doc jersey and went retro with a crested Kelly Gruber jersey.  This completed the Holy Trinity.

Of course, this being a Halladay start, it didn’t last very long.  Halladay was very sharp but was getting squeezed in typical Halladay fashion.  The story of the game, for me at least, was Halladay threw 23 first pitch strikes out of the 31 hitters he faced. I absolutely love that, but I am a former pitcher and I appreciate how important that is.  Nothing frustrates me more than a pitcher who can’t throw strikes and I would soon relive those pains and sorrows in the Cecil start the following day. But let’s not go there yet.

There’s not a lot to say here about the game.  I was impressed with Travis Snider’s arm in RF – a lot better than I thought it would be. He has either improved or I never took him seriously before. Eric Hinske is a bum. I hate him.  Scutaro and Hill are a great DP combination to watch. But the most important thing I took note of was Vernon Wells at-bat music selection.  It is a Rihanna song and one of the lyrics is especially fitting to Vernon’s current situation: I’ve got my mind on my money and I’m not going away.

So I was on a Halladay high when I bought tickets from the gate 9 window and stepped into the RC expecting (foolishly) for more of the same.  Surveying the field, I noticed that Johnny Mac was in LF.  Now I am one of the biggest John McDonald apologists around, don’t get me wrong.

But if the Prime Minister of Defence is in the game, I want to see him for his epic defense and the certainty that he will be spinning web gems all game long.  This won’t be happening when he is in LF.  Couple this move with a lineup that includes Kevin Millar (batting cleanup!!!), Edwin Encarnacion, Jose Bautista, Raul Chavez…and I want my money back. Seriously, it felt like Cito was spitting in my face for coming to the game.  I can only assume Cito is trying to give Johnny Mac playing time everywhere to show other teams he is a versatile player so that he might catch on with someone else next season.  I think he has had more playing time in the last week and a half then he has had the entire season.

Brett Cecil sucks. Casey Janssen sucks. Scott Downs can’t throw a strike. Kevin Millar has the ugliest swing in baseball.  Jason Frasor is good. 1-4 in the Jays lineup went 0 for 16 with 5K.  If Vernon Wells pops up to the catcher one more time I am going to shoot myself in the head. Edwin Encarnacion is god awful.

When Phil Hughes was pitching to Travis Snider, I said to Early “he is going to throw him 3 straight fastballs”. And he did. 95, 94, 94.  Snider had no chance and struck out on 3 pitches.  His swing is incredibly long and needs some reconstructive surgery at the hands of Gene Tenace.

There’s really not my I can take away from this game.  However, my twitter comrade _L_Jay_ said it best: “I’d put up with Saturday to have the memories of Friday.”

The concessions at the Rogers Centre have been dramatically improved.  Early and I enjoyed a delicious roast beef sandwich and coleslaw from an actual carvery set up on the 100 level.  The Muddy York market is spectacular. The pulled pork sandwich is a must-try.  As wel, the Daiquiris and Tropical Coladas (made with Amarula) are epic and perfect for a day game under the hot sun.

Also, the highlight of the Saturday game for me was when the mother sitting beside me with the 2 kids (for whom I was watching my language the entire game for) screamed out that A-Rod is a mother-f—er.  Well played, Mom.

I miss you Gregg Zaun.