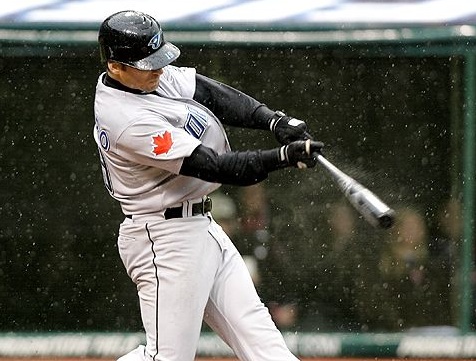 Some basic research carried out by esteemed author and sports writer Joe Posnanski concludes that MLB batters averaged the following line (avg/obp/slg): .162/.173/.236 from 2000 – 2008 on 0-2 counts via action pitches. Joe’s definition of action pitches from his study:

By action pitch, I mean pitch where something happened: Hit, walk, error, hit-by-pitch, sacrifice, strikeout, groundout, flyout, lineout and every other goofy thing you might see on the APBA unusual play charts.

In 2009 Marco Scutaro hit an amazing line of .364/.353/.576 ! (OBP is lower than average due to a sacrifice fly (sf), which is counted as a negative in the OBP equation). This included a way out there BABIP of .458. The sample is relatively small but Marco laced out 12 hits in his 33 at-bats. If he produced at MLB average he would have just over 5.

I wanted to compare Marco with a couple of ‘above’ replacement level hitters. Ok, way above replacement… Joe Mauer and Albert Pujols. Here are their respective stat lines with 0-2 counts in 2009

Delving back into Scutaro, here are his 0-2 count lines from the previous three seasons.

While he clearly improved at the plate in 2009, I’m going to say that Marco’s 2009 0-2 success is a statistical aberration based upon the 2000-2008 MLB average, his prior three year average and the comparison to Mauer & Pujols.

In the end the Jays essentially traded Marco for Gonzalez, draft picks and cost savings. This trade-off will look pretty sweet if Marco goes back to being human on 0-2 counts in 2010.