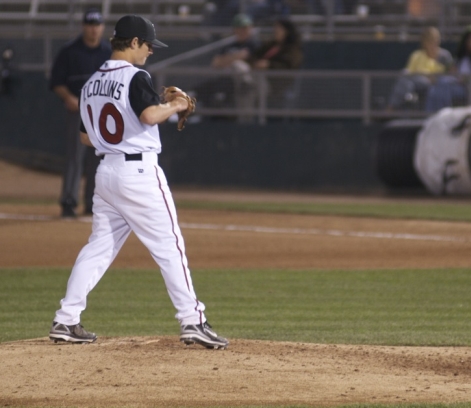 Tim Collins was a star pitcher of the Worcester Vocational High School that went 91-5 in  four years. He led his team to the Massachusetts State Final and semi-finals in two years.. However, pro scouts overlooked him based on his diminutive stature.  Collins stands at only 5′ 7″  and weighs in at 150 lbs.  There were 1,453 names called in the 2007 June draft and Tim Collins was not among them.  Collins was ready to pack his bags and head for the Community College of Rhode Island and try and create some buzz there.  What he didn’t know however, was that he was going to be noticed sooner than he thought.

Then-Toronto Blue Jays GM JP Ricciardi went to see Tim Collins in Worcester (where Ricciardi lives) based on a tip from friends who had been following Collins’ high school season.  Collins came on in relief and pitched for 4 innings – striking out 12 in the process.  JP liked what he saw and had him work out with area scout Tom Clark.  Following the workout the Jays signed him as a non-drafted free agent to a $10,000 contract and shipped him off to play in the Gulf Coast League.

When Tim Collins arrived at the Gulf Coast Jays clubhouse in the summer of 2008 for the final month of the season, some of his teammates seemed skeptical.

“They were telling me when I came in the locker room, they thought I was one of the players’ little brothers,” the 5-foot-7, 150-pound Collins said. “I guess I surprised them all when I went out there and pitched.” 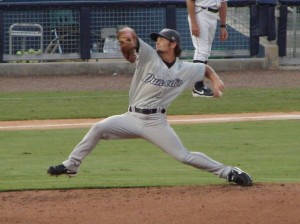 The following season Collins played for the single-A Lansing Lugnuts. He made 39 relief appearances in his full-season debut as an 18-year-old, going 4-2 with a 1.58 ERA. Pretty impressive.  Not only that, he yielded 36 hits and 32 walks while striking out 98 in 68 1/3 innings

The 5’7″, 150 lb. lefty continued to dominate opposing hitters in his second season of professional baseball.  He  struck out 99 in 64.1 IP last season with Dunedin. Versus left-handed hitters it wasn’t even fair: he held them to a meagre .088 batting average against.  It was about this time that Collins began to get noticed by the Jays blogosphere, twittersphere, webisphere – even hemisphere.  Jays fans were abuzz over this pocket rocket annihilating his minor league competition.  Since no Jay fans had the opportunity to see how he was getting it done, Collins was shrouded in mystery – this mysteriousness contributed even more to Jays fandom fascination.

So just how is he doing it? 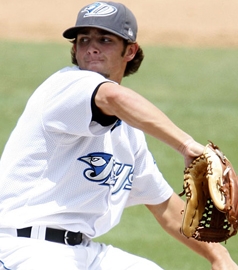 Collins throws 3 pitches: a major-league 93mph fastball, an over the top 12-6 curve (rated plus) and a work-in-progress changeup.  Baseball America rated Collins’ curve as the best in the Blue Jays minor league organizations. There are a lot of relievers with great numbers in A ball who flame out well before the big leagues, but most of them are trick-pitch guys. In Collins’ case, he’s dominating hitters with a fastball/curveball combo that should play well as he climbs the ladder.

Projected as a lefty specialist out of the bullpen at the Major League level, Collins could continue to rise quickly within the organization thanks to a power arm and his ability to shut down his southpaw counterparts.

As an aside, back in my playing days I used to frequent a great performance/nutrition/supplementation site known as “Testosterone Nation.”  Apart from selling supplements, they also provided free training articles and a forum for athletes to discuss certain topics.  One of the contributers to the site was a man by the name of Eric Cressey.  Focusing on athletic performance and specializing in baseball, Eric Cressey teamed up with Tim Collins for an off-season training program.  From the looks of things, this past offseason has been fortuitous for Collins.

He’s added 21 pounds of muscle to his frame, which makes it a lot easier to be taken seriously when you are listed at 171 lbs. instead of 150 lbs.

“I don’t know where I might be right now. I might be working at a construction site,” Collins said. “It’s unbelievable. I can’t stress enough how much he’s meant to my career.”

I expect that we’ll see Collins in New Hampshire, where he left off, for the opening of the 2010 season.  Will he make it to the big leagues? Only time will tell. 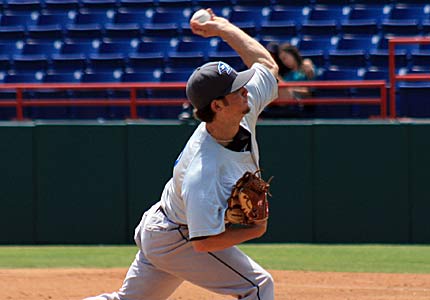