Former Blue Jay Tomokazu (Tomo) Ohka is in training camp with the Quintana Roo Tigres of the Mexican League trying to earn a roster spot.  The 34 year old Ohka is a former star of the Yokohama Baystars of the NPB and has played for numerous MLB franchises. 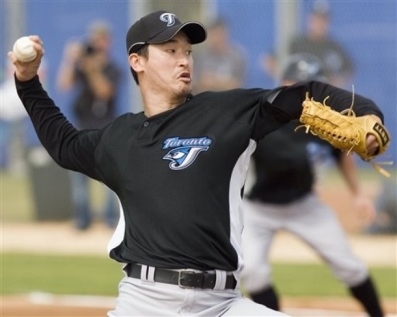 Last season Ohka pitched 71 innings for the Cleveland Indians, allowing an astronomical 18 HR.  His ERA was 5.96 in a relief role. In his MLB career Tomo Ohka has 51 wins with 68 losses, 590 strikeouts, and 302 walks and an ERA of 4.26. For a guy who is prone to giving up the gopher ball, it will be interesting (maybe sadistic) to see how he will fare in the Mexican League should he make the team.  The Mexican League is home-run-happy with many teams playing in the thin air of high altitudes.

Tomo Ohka will be competing for a roster spot alongside other foreigners who are in training camp.  This includes last season’s save leader Scott Chiasson, Cubans Alex Sanchez and Leslie Anderson, and Dominicans Mayobanex Jose Fernandez and Bernie Castro. 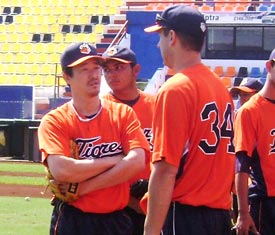