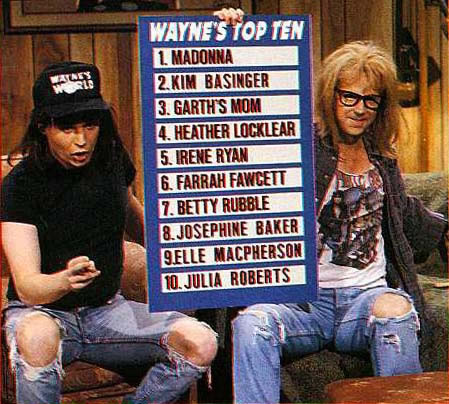 Between 2 and a half writers at Mop Up Duty (more or less) we have almost reached the 1000 post plateau in a fairly short period of time.  In honour of that occasion which has yet to occur, I present to you the Top 10 Mop Up Duty Posts of All Time. (You will notice a trend… many of the posts were authored to subsidize our nerdy posts. Guilty as charged).

1. Baseball’s Hottest Wives – This post is head and shoulders above the rest, thanks to Roger Clemens wife, Debbie Clemens.  We had posted the benefits of her HGH use here before she admitted it.

2. The All Party Team – Drunken baseball players. What more could you want?

3. Heidi Watney Bio – One of the most gorgeous women I have ever seen and she talks about baseball!!

5. Steven Strasburg Bio – The #1 pick in this year’s draft, we followed him during his time in college.

6.  Yu Darvish: Best Pitcher in Japan – We were on Yu before he shone in this year’s iteration of the World Baseball Classic.

7.  Caitlin Lowe Bio – She is a college softball player.  If you are not sure why this one is popular well… I guess you’ll have to see for yourself.

8.  Futures Market: Evan Longoria – Kman has been a fan of Evan since he was a young whipper-snapper.

9. A Story Forgotten: Roy Halladay’s Reinvention – My labour of love.

10.  Worst MLB Uniforms – Early is very concerned with aesthetics and he lays out the worst offenders.