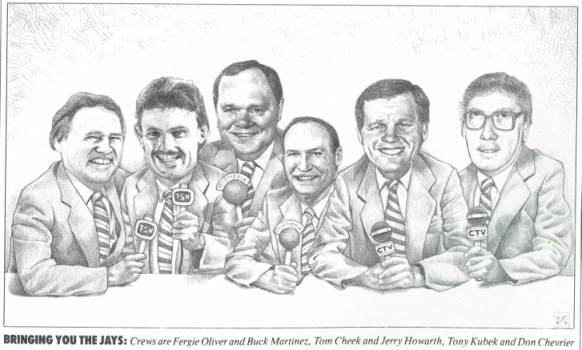 This article is intended to be a general discussion of the broadcasters that the Toronto Blue Jays have employed both in radio and television since their inception in 1977. Being the young man that I am, there are a few that I can’t remember and am not familiar with so please bear with me. I am going to try to rank them just for fun while leaving those out who I can’t really rate. I am not going to differentiate between colour guys and play-by-play guys. Without further ado, lets get to it.

Tom Cheek
He of the 4,306 consecutive games called, Tom Cheek was the colour commentating half of the Tom & Jerry (Howarth) radio show that called Jays games since 1977. I can always remember listening to him in my childhood and his voice, to me, was always synonymous with summertime. I was fortunate enough to attend the Jays game in 2005 where Tom Cheek was inducted to the “Level of Excellence” and there was not a dry eye in the building. Tom Cheek never used gimmicks or catchphrases and never tried to make himself part of the show. All he did was tell listeners, plain and simple, how he saw the game, putting his trusted stamp on every milestone moment in Toronto Blue Jays history. One of his most famous calls is the “Touch ‘Em All Joe” call of Joe Carter’s momentous HR to win the 1993 World Series. Feel free to listen to that little piece of heaven here. 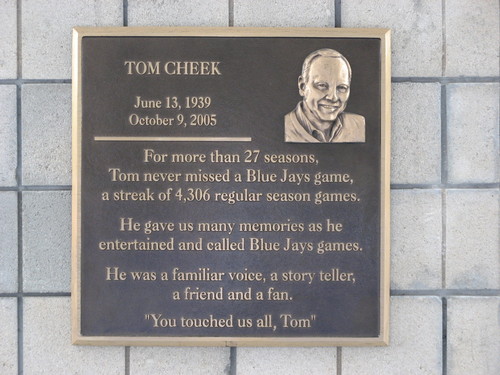 Jerry Howarth
Jerry Howarth joined Tom Cheek in the radio booth in 1981, taking over from Cheek’s previous partner, Early Wynn and continues as the play-by-play man to this day. Some of Jerry’s trademark phrases include: “Swiiing and a miss, he struck him out!” (when a Blue Jays pitcher strikes out a hitter swinging) “(Blue Jay player) scoooooores / (Blue Jay player) around third, he scoooooores!” “Call it two, a double play” “Lined/ground ball to the left side/up the middle/to the right side … throoouuugh for a base hit!” Jerry would always begin his broadcasts with the familiar “hello friends, this is Jerry Howarth.” The first syllable of Jerry’s dulcet tones would flood my memory of lazy summer days listening to the ballgame on the radio. 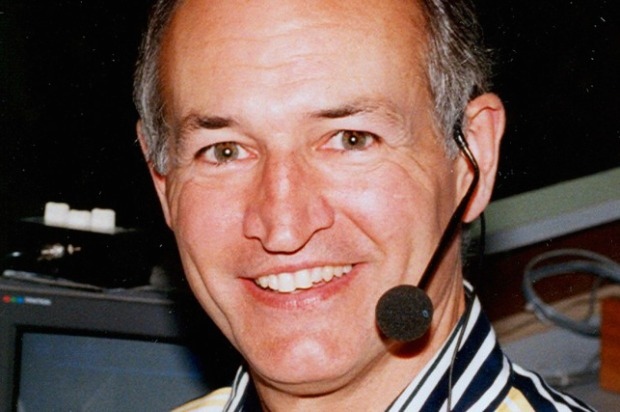 Dan Shulman
Shulman, a Canadian boy, became the Jays play-by-play man for TSN in 1995 and stayed for 7 years before moving to the States for greener pastures. It is a shame really, he was/is such a good broadcaster and since his departure the Jays have had a gaping void that they have been unable to fill. His contact expires with ESPN in 2007 however, so perhaps there is an outside chance he could return to the Jays!?!? He continues to reside in Toronto.

Buck Martinez
Buck is a former Jays catcher turned colour-man turned Jays manager. During his colour days in Toronto I loved him, and it was a treat to watch the tandem of Buck and Dan Shulman on TSN. When talking about Buck, there is a must-tell story that accompanies him wherever he goes. In one game vs. the Royals I believe it was, Buck was catching and there was a play at the plate. The LF (George Bell?) threw home and there was a collision at the plate. Buck fractured his leg and still managed to tag out the lead runner. After tagging out the lead runner, he threw a weak throw to third. It was a bad throw and the runner from third attempted to come home. Buck caught the throw home and tagged out that runner as well, while pieces of bone were sticking out of his leg. STUD!  Check it out here.

Jim Hughson
Jim Hughson was Buck Martinez’ broadcasting partner before Dan Shulman stepped on the scene. He is most famous for calling all three games that the Jays clinched first place in the early 1990’s (’91, ’92, ’93). Jim left to pursue his real love, hockey. Jim was a solid Jays sportscaster but he loses points because I know deep down he would rather have been calling hockey. It is kind of like being a kid growing up and watching Pee Wee’s playhouse. As soon as I found out he was charged with performing a lewd act in an adult cinema, I never thought the same way about him again, despite him having produced countless hours of quality children’s television. His image was tarnished forever. Anyway, moving on…

Fergie Oliver
This is another guy that I grew up on. Everyone knows him for his catch phrase “How about those Blue Jays!” Not many people know he hosted a classic game show called “Just Like Mom” where kids would try and cook for their parents and not have their parents throw up. It was great. What was also great was on the air, Fergie was told that former Expo Al Oliver’s wife had just written a book. Assuming that women were only capable of writing cookbooks, Fergie replied “wow thats great, I am sure it has a lot of great recipes in it!” 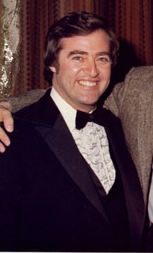 Mike Wilner
Wilner is currently the play-by-play announcer and studio host for the FAN 590’s baseball broadcasts. He is a condescending gossip girl and an unabashed homer.  He belittles fans who call in with delirious claims, yet ignores those fans who challenge his own delirium.  That said, he does bring sabermetric statistics to the mainstream and does yeoman’s work in educating the casual fan.

Darrin Fletcher
I like me some Darrin Fletcher for various reasons. Firstly, I like how he views the game from the perspective of a catcher and really has a feel for the minor details going on in the game. Secondly, he is a bit of an oddball and you never know what weirdo thing he is about to say, which I like.

John Cerutti
John Cerutti was a former left handed pitcher for the Jays who turned to broadcasting as a colour commentator. He was just a professional in every sense of the world and did a helluva job carrying the broadcast and giving it some level of respectability despite being paired with Rob Faulds, who I will get to later.

Pat Tabler
Although quite the goofball, Pat Tabler was a nice foil to Jamie Campbell’s straight-man routine.  His game has slipped since being paired with Buck Martinez.

Brian Williams
Brian Williams did the CBC broadcasts in the 80’s and early 90’s if I remember correctly. A little bit too rigid and awkward, I think he was best suited towards his Olympic sports and not baseball.

Rance Mulliniks
Rance is a super stud when it comes to knowing what pitch the pitcher is going to throw next and what the hitter should be looking for. He is a big time nerd which I love, but he doesn’t seem to feel comfortable in his role yet but I hope he gets better in time.

Jamie Campbell
Jamie Campbell took over from Rob Faulds last year doing the Sportsnet broadcasts. With that being said, I don’t want to crucify him for his job since he is new, but there are a few things he needs to work on. Namely, getting some new material to talk about instead of rehashing the same story game after game after game. There are only so many times I can hear about how Reed Johnson keeps Ty Cobb’s picture in his locker and how Frank Catalanotto watches video tapes of the opposing team’s pitchers before each game. I get it Jamie, move on. Also don’t try to be such a stuffed shirt all the time… though I prefer that style over Steve Lyons and Tim McCarver any day.

Rod Black
Rod is best suited to calling figure skating and not baseball. The thing that bugs me about him is that any medium to deep fly ball, he calls like it is definitely on its way out of the ball park and it is just plain silly. “OH MY! It’s back, its deep, it just might be!!!!!!! caught.” Also, Jamie Campbell is guilty of this as well.

Warren Sawkiw
As Daperman put it, Warren Sawkiw blows sunshine all day. I can’t tell if he is a real human being or not or a robot with a huge smile. Nothing he says has any substance.

A few guys I don’t really remember include: Tommy Hutton, Paul Romaniuk, Don Chevrier, Tom Candiotti, Vic Rauter and Tony Kubek. If you have any thoughts or opinions about those guys, feel free to throw them down. And now, drumroll please………..

Rob Faulds
First of all, he has the worst catch phrase in baseball history – “What do you think about that!” Secondly, and most importantly, he doesn’t know a thing about the game of baseball. He was always asking John Cerutti about basic plays in the game and why things happened the way they did. I can’t think of any other way to describe it than it was an embarrassment. Another reason why hockey or golf or curling guys should stick to their respective sports. It takes a special breed of sportscaster to be able to call baseball. You have to have a genuine love for the game.

Who did I forget? What are your thoughts on some of these guys? Feel free to throw down your comments. 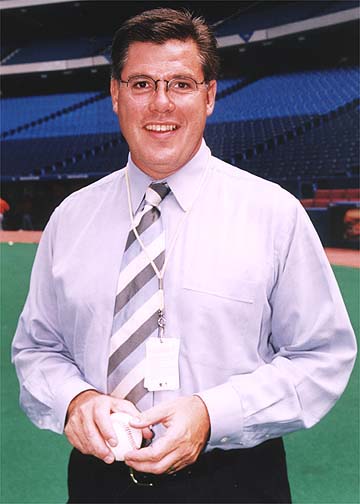