Limping to the finish line, the Blue Jays finished off their ten game home stand on Sunday, going 3 – 7 over the stretch.

The tough month for Toronto continues, as the Jays go on the road for the next week plus, visiting Detroit, Baltimore and the Bronx. They end off the month hosting Tampa.

An absolutely killer schedule. Morrow, Lawrie and Bautista are both on pace to return in the near future, which should help. But it’s likely that Toronto will finish the season sub .500. On the plus side the team will get the chance to play spoiler, take extended looks at various rookies and receive a high draft pick in 2013.

The Jays ‘lucky’ season continues, as they draw Verlander and a revitalized Max Scherzer. The Jays only reprieve is a struggling Anibal Sanchez.

Simply put, Scherzer has been very unlucky this past month: His WHAV (well-hit average against) is below MLB average at .200, his BABIP against on groundballs is almost 200 points above MLB average, at .424

Scherzer has done a good job locating pitches down in the zone this month: 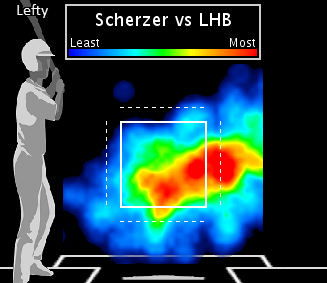 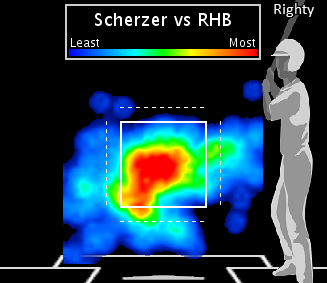 He throws a fastball/slider combo vs RH, and a fastball/change/slider vs LH.

Jays Plan of Attack: This is going to be a tough assignment for Toronto. The Tigers are a huge -210 money line favourite. Hopefully luck is on Toronto’s side–and the BABIP blips continue. Otherwise this could be another double digit strikeout outing for Max Scherzer.

Sanchez has had the tar kicked out of him since joining the Tigers. A 7+ ERA, opponents batting average of .380 and only 13 K in 4 starts. Before the deal, Sanchez struck out 110 in 121 IP for the Marlins.

Sanchez throws a 90 – 94 MPH four-seam fastball, as well as a cutter. He complements his fastballs with a  hard slider/change-up combination and will dust off the occasional curve. From what I can gather, he’s been unlucky; but he has also been around the plate far too often: 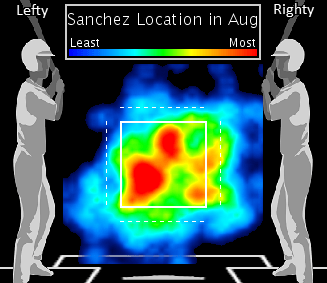 Jays Plan of Attack: This could be a good match-up for Toronto. If nothing else, the youngsters in the line-up like to swing the bat.

Verlander is a lucky dude…

I mean, check out called strikes against LH this season!: 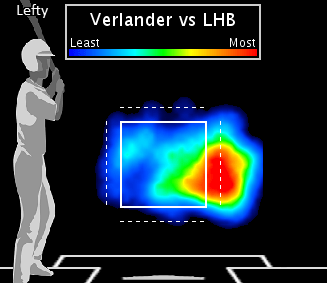 Add in the quality of Verlander’s stuff and it’s easy to see why LH are hitting .215 with a meek .351 SLG this season.

Verlander throws three pitches against RH. Besides the quality of his offerings, he locates all three pitches in the roughly the same location: 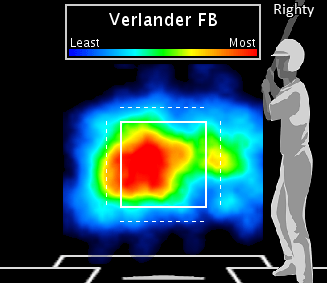 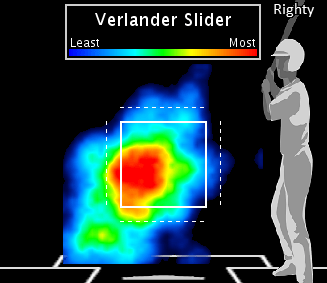 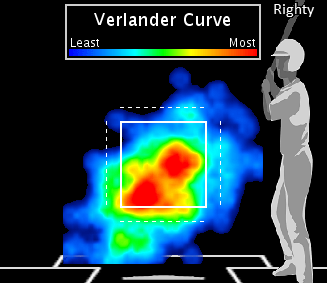 Jays Plan of Attack: Mr. Obvious states that Verlander is a tough draw. LH have to expand the strike zone. RH can look location but from there, well, good luck.