This past weekend Callum took to the @MopUpDuty twitter account and caused quite a stir, stating the following:

If up to me, I would rather take the ~$14 million earmarked for Santana and use it on eating salary of a better pitcher at the deadline.

MopUpDuty writer Matthias disagrees with Callum’s tweet. He feels that $14+ million should be used right now to sign Ervin Santana. His reasoning is below.

Afterwards, Callum gives his full take on his controversial tweet, and explains why he feels that the $14 million should be earmarked for later in the season.

I can’t get behind this scenario. Currently, Santana MAY cost $14 million for a one-year deal. All the Jays stand to lose is a second round pick. Now I’m not sure if the MLB & MLBPA will hammer out some type of reconfigured compensation in light of this off-seasons FA market, if they do it will only enhance Ervin’s value. If they don’t the Jays can hopefully extract something similar to his current compensation price. Finally, the option of a sign & trade becomes viable in this current FA system and could yield an incoming player next off-season.

Conversely, trading for a pitcher around the deadline will cost the Jays assets. The current structure of the Jays farm system:

Unless the Jays can deal from the bottom levels, teams will want one of the big two. In light of the Syndergaard Deal, I’m not thrilled with the proposition of trading away seven years of control on an SP, regardless of who’s coming over in return.

With all of this said, I don’t have faith in Santana being anything more than a #3. I can see him eating some innings and producing around 2.5 – 3 WAR. Judging how WAR works with in the first place, this gives Santana a net WAR upside of 1.5 – 2 wins for the Jays vs a mixture of pitchers in the 4/5 slot of the Jays rotation. However, the 200 IP itself has value; it keeps prospects like Sanchez/Stroman off the clock. And the deal becomes sweeter if Ervin can keep the ball in the park and produce above my level-headed expectations.

All things considered, I think the positives win out. I think the Jays should be players at $14 – $16 million on a one-year deal.

First, let me clarify what I meant in the original tweet as there wasn’t enough room to do so in 140 characters.  I believe the Blue Jays are a better team with Santana than without.  They can pay him $14 million or $25 million for one year for all I care.  With that said, my statement was said under the assumption that the Blue Jays are operating under a budget and have finite resources to work with.  The $14 million that they could pay Santana is money that was presumably earmarked for a qualifying offer for Josh Johnson. I say presumably because I don’t really know what the financial situation of the Blue Jays is and what financial constraints Alex Anthopoulos is operating under.  I am led to believe that money is indeed an object based on the relative inactivity of the Blue Jays this past offseason.  If Rogers was truly willing to do whatever it takes to make this team better, we would see Brian McCann catching instead of Dioner Navarro. Tanaka would be part of the rotation.  Even Stephen Drew would be playing second base.

So, my initial statement was rooted in this framework. Rogers is not an owner like Detroit’s Mike Illitch or the Dodgers’ Magic Johnson ownership group that has a track record of spending money to improve the team at the deadline.  If I have $14 million to spend and can only choose to spend it on Santana today, and that this expenditure precludes adding salary at the deadline, I would choose to spend that money on taking on salary of a better pitcher at the trade deadline. The $14 million comes from what has been bandied about the rumour mill as to what Santana is looking for.  Again, we are working with limited information.

Of course, this logic is based on the presumption that the Blue Jays will in fact be contenders at the trade deadline.  I think the Blue Jays roster, as it stands now, will at the bare minimum be within striking distance of the 2nd wildcard at the deadline.  Remember, Dickey was hurt last season, Brandon Morrow went down early and Josh Johnson was a non-entity.  That’s 40%+ of the rotation.  Not to mention Brett Lawrie’s significant loss of time,  Jose Reyes missing half the season, JP Arencibia’s penchant for striking out 25% of the time and Bautista injuries. The roster as it stands now is already a marked improvement on last year’s team – as long as it is healthy. 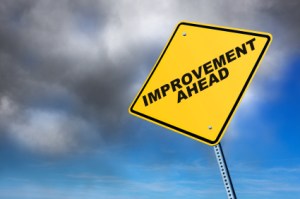 So then, will 3+ months of Ervin Santana in the rotation put them in a far greater position to compete for a playoff spot than a deadline deal?  Here are a list of pitchers that could presumably had at the deadline and their annual salary:

and those with an additional year of control:

True, these pitchers will require assets to acquire.  But the window on the Jays being able to contend for a playoff spot is not perpetually open.  I’m willing to part with prospects who may or may not pan out now for the chance to deliver a playoff appearance to Toronto fans for the first time since 1993.

Now the meat of my argument.  I don’t think Santana is the saviour of the Blue Jays’ pitching rotation and judging by the fact that he is still unsigned, MLB team executives feel the same way about him. 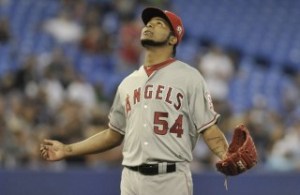 As pointed out by Ken Fidlin in the Toronto Sun, Santana has many flaws.  He led the league in home runs in 2012 and the ball absolutely flies out of the Rogers Centre.  Just ask RA Dickey.  Santana pitched in the AL Central, arguably the weakest division in baseball.  I see him getting chewed up and spit out by the meat grinder that is the AL East.  In fact, Santana’s career ERA vs. the AL East is 4.86 – nearly a full run higher than his career mark.  His ERA on the road vs. the AL East is 5.41  Not that studly.

In 2013, Santana threw more sliders than any other pitcher in baseball.  The slider is a pitch that puts tremendous strain on the elbow and Santana sprained his in 2009.  There are rumblings that his elbow is in tatters and his medical reports are scaring teams off – part of the reason why he hasn’t signed yet.  So those 200IP everyone is banking on him bringing to Toronto are far from a sure bet.  These reasons are why I don’t think that Santana will have as much of an impact as some of the pitchers listed above.

In regards to keeping Stroman off the clock, I get that, but it doesn’t concern me much at this point. I like to push  young, talented pitchers and all you have to do is look at Jose Fernandez and Michael Wacha to see how well it can work for a team.  Besides, based on my initial statement, Stroman/Hutchison/Happ won’t have to shoulder the load all year.  Just half a season.

The Jays are a better team with Santana, that is clear.  But is it the best way to spend $14 million that may or may not be available?

Where Do You Stand?: Is Santana worth a $14+ million outlay when factoring in the Jays self-imposed current economic constraints?