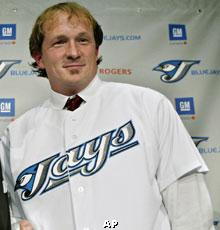 God damn it J.P., you love pissing away money, don’t you? The Jays released BJ Ryan a few hours ago. From Bastian:

Ryan is still on the books for roughly $5 million more this season and another $10 million in 2010 — paychecks that will continue to head his way from the Blue Jays.

I’m sure they did what they could to shop him around and no one took. Wait, no they didn’t. Instead of sticking with him, giving him a ton of innings, etc, they cut him loose. J.P. does not like players venting in the media, does he?

For the Record: BJ Ryan had a 1.04 JUNE ERA with a .207 opponents batting average. Control issues? Yes. An overall 1.38 WHIP in June. Is that stat line worth releasing at a cost of $15 million?

Add this to the Frank Thomas debacle and J.P. will pay about $25 million in released contracts over the past season and a half. Fuckin’ idiot. First time I’ve used the F-word on this site and if things continue it won’t be the last.

I’m going to agree with BJ. He needed to pitch more. This club is one game over .500 and going nowhere fast. Ryan should have been given a prime spot in the bullpen to up his trade value. He certainly would have passed waivers later in the season if need be for a trade, so value was still present. It’s not a matter of having BJ pitch for his effectiveness. You use him to get his contract off the books. Instead BJ rides the pine and gives Cito and J.P. lip. Nothing gets solved and $15 million goes right down the drain. 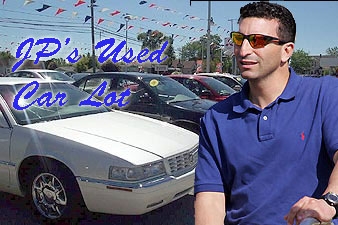 If the Jays brass bitch and moan about not having enough money, yet can afford to piss money down the drain by releasing these “clubhouse cancers” then… Man, this really pisses me off. When the money’s not around to re-sign Marco in the off-season… Stepping away from my incoherent rant. But don’t worry folks. J.P. will go back to the old stand-by “players get injured, what can I do?”. Same old shit, same old results. Actually Ricciardi quote:

The alternatives were to send a kid down with available minor league options. Or eat $15 million. Whatever. The Jays need to maintain that .500 winning percentage. 83 wins each and every season, don’t ya know? It really doesn’t mean that much to the fans but it keeps Ricciardi employed, so that’s how we’ll roll. Shit.

Update: Fellow Mopupduty.com Writer Callum has written a post defending the move. Cutting BJ the Right Thing to Do – Check it out. Which side of the argument are you on?