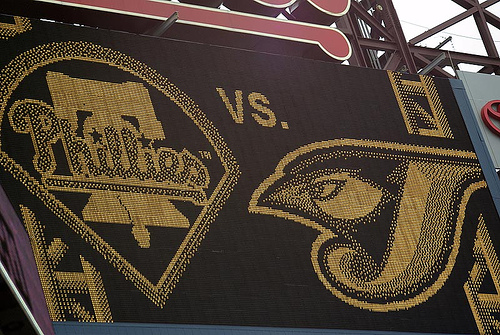 We’re livebloggin the first two games on the Phillies vs Jays series for The Score. Come on by!

Here’s a bunch of interesting Philly stats I’ve collected before game 1 of the Series:

Vs left-handers the Phils are 16 – 9 this season. They lead the majors with 35 HR vs lefites.

The Phillies are only 4-11 vs the AL this season, including a three game sweep vs the Toronto Blue Jays.

The bullpen (outside of the closers role, whomever is filling it at the time) has been one of the Phillies best strengths. In an odd stat, when starters work less than six innings the Phillies are 15-11.

Cole Hamels is 4-1 with a 3.13 ERA in his past 10 games. In his previous start vs Toronto Cole went 6 IP, allowing 7 hits and 2 walks. The Jays were able to score 2 runs during this time, striking out 6 times.

Jays starter Ricky Romero had troubles with the following hitters in his previous start vs the Phils:

Rollins 2 for 4 with a double

Victorino 1 for 2 with a walk

Despite this he allowed only three runs over seven innings, including nine strikeouts (three of Ryan Howard). Romero has not allowed four runs in a start since May 31st.