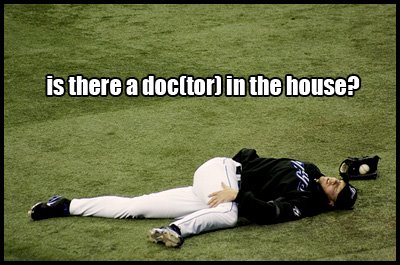 Rumors are swirling all over the place regarding the Jays dealing Doc Halladay. The front page of ESPN Baseball is a Halladay watch zone, so I won’t go into rumors here. Instead, let’s look at some of the viable options going forward.

I find it very difficult to imagine a world in which the Jays can compete in 2010 without Halladay, not to mention the soon to be free agent Marco Scutaro.

Once again J.P. appears to be trying to win now and win later at the same time. This results in our yearly .500 level clubs that don’t go anywhere. One of two scenarios need to be followed for the Jays to make the playoffs in the foreseeable future:

1. The Jays need to get aggressive for a 2010 playoff run. Obviously this plan would necessitate keeping Doc, resigning Scutaro and adding a legitimate DH bat (with Lind shifting to LF). Maybe even trade out some minor league prospects for short-term help.

2. Reboot. A full reboot, not the half-ass type we’ve seen of late. Trade Halladay, move Scutaro before the deadline, see what the market is for Rolen (contract up in 2010), etc. Bring in some high A, AA type prospects that will be ready to compete in 2011 and beyond.

For the record I’m not a fan of dealing Halladay. But if he does have to go, move out any other short term assets shortly after. Clearly the message and the reality will be that the Jays aren’t making the playoffs anytime soon without Doc. Adjust the roster accordingly. And if you keep him man up and add some assets of the non-Dellucci variety to the ballclub.