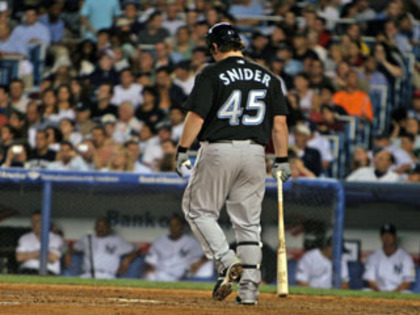 Is it time to send Travis Snider down to the minors? After a few decent games even the despised Lyle Overbay has a better stat line than Travis Snider’s .133 batting average and .524 OPS.

The one main issue I’ve found in Snider’s game this season is his inability to handle the high heat.

The following 9 section quad chart for all pitch types is taken from an pro scouting report and is not Pitch F/X based. Zones with red borders are considered power zones.

According to this Travis can’t hit anything up (with the assumption being that the majority of up pitches are fastballs). He’s also around an MLB average hitter with no power on the outside portion of the zone. Clearly he feasts on the inside and middle portions of the zone.

The same scouting report lists Travis Snider’s percentage of well hit balls (hit or outs) in the ‘up’ location as .000 this season. The MLB average on this scale is .103. Last season Snider’s well hit average up was .038, grading him as a D- in that location.

The concluding 2010 data found after running a half ass four-seam fastball analysis Pitch F/X analysis via the awesome Joe Lefkowitz Pitch F/X Tool confirms that teams are throwing fastballs up (as well as away) from Snider. 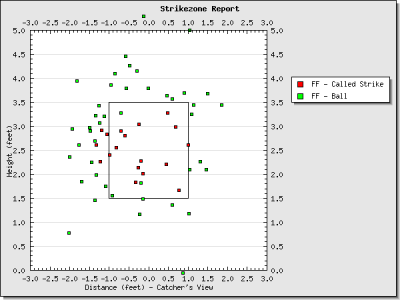 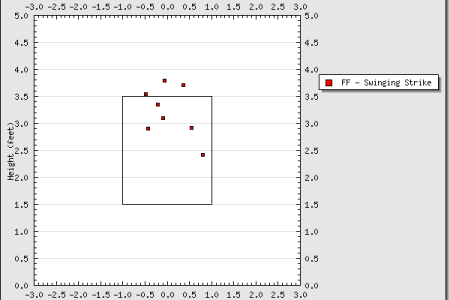 Unfortunately for Travis teams are currently and in the future will be pitching to this weakness.

This raises a couple of interesting questions:

I’m not sure myself. On one hand I’d like to see what Travis can do in the show over the next few weeks. On the other hand I’d rather have him work out any issues down on the farm without his arbitration clock ticking. It’s a tough call, what do you think?