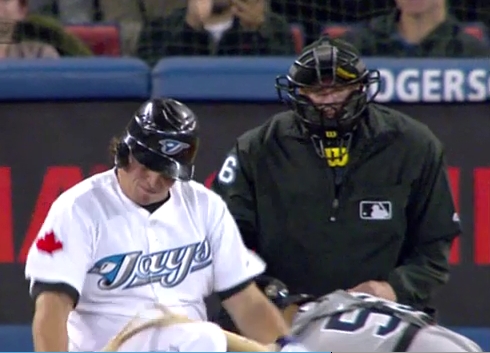 Despite the good vibes generated from last night’s come-from-behind win, there were a few things that came out of last night’s game that were more than a little disconcerting.  The most glaring was Travis Snider’s futility when pitched a curveball.

The fact that Travis Snider was absolutely clueless against AJ Burnett’s curveball was most worrisome.  To be fair, Burnett’s curveball is not your run-of-the mill bender.  It is known as a spike-curve (also referred to as a knuckle-curve) and it has much more velocity than a regular curve with a much sharper break.

In Snider’s first at-bat against AJ in the 1st inning, Burnett starts him off with a get-me-over fastball (albeit 95mph) for strike 1.  He then throws 3 straight spike-curves.  Miraculously Snider fouls one off, but flails wildly at the other 2 and strikes out swinging.

Snider’s 2nd at-bat comes in the 3rd inning and Burnett sticks to the same plan.  Burnett’s 1st pitch is a ball, so he goes to the curve on the next 3 pitches, 2 of them making Snider look incredibly foolish.  Of course, Burnett has the reputation of having the million dollar arm and ten cent head and he lives up to it by firing Snider a fastball.  Fortunately for Burnett, Snider hits a harmless groundball for the out.

Snider’s 3rd at bat in the 5th inning was straight-up embarassing.  After starting Snider off with a get-me-over fastball the first 2 at-bats, Burnett throws consecutive spike-curves to Snider that makes him look like a little-leaguer.  A 3-pitch strikeout for Burnett and quite an embarassing at-bat for Snider.

In the 6th inning Burnett began to unravel and was pulled by Yankees’ manager Joe Girardi.  In his place was relief pitcher David Robertson.  Ah, a reprieve for Snider from the dreaded dirty deuce.  Wait, here’s Gregg Zaun with another valuable tidbit via Twitter:

Zaun would know.  And of course, he was right.  Robertson must have been reading the book on Snider, or at the very least been watching AJ’s handiwork.  4 straight curves later and Snider again looked overmatched, outclassed and ridiculous.  The at-bat ended up in a broken bat over Snider’s leg. 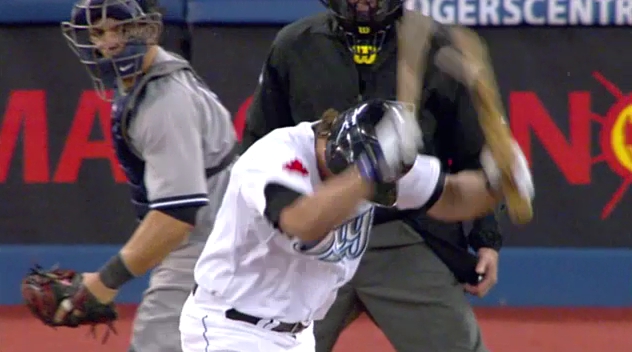 At the end of the game Snider’s frustration turned to elation as he took a pitch he could handle (a fastball) from Ivan Nova and drove it to the right-field power alley to drive in the winning run.  A great ending to be sure, but it does mask the glaring flaw that Snider revealed in this game.  Fortunately for Snider there are not many pitchers in the league who are capable of throwing filthy curves like Burnett and Robertson.  But at this level they do exist and where does that leave Snider when the Jays run in to one (or more)?  Do you sit him against every pitcher who has a decent deuce?  How can he work on hitting the curve?  Batting practice surely won’t do it – good luck finding a BP pitcher who can throw a decent spike curve.  Is he having difficulty picking the spin on the ball?  This is possible because of the way he is completely and utterly fooled on each one he sees.  Outfit him with goggles from the Brett Cecil line.  Perhaps he should change his approach.  The spike-curve can be difficult to throw for strikes and Snider might be best served to wait on a fastball or changeup that he can drive.  I don’t have the answers but I do know one thing:  Snider needs to make an adjustment or he will be further exposed by Major League pitchers. 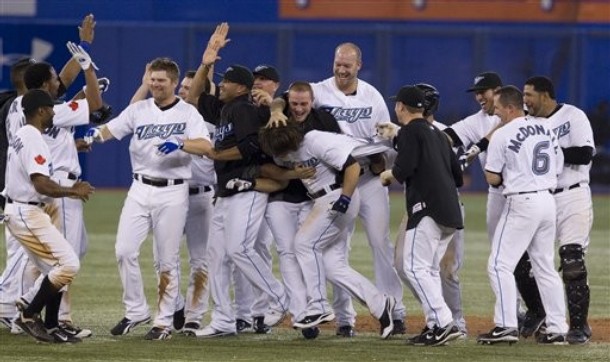 On this evening’s Jays Connected analyst Gregg Zaun broke down Snider’s swing and explained why he is unable to hit the curveball in his segment Zaun 101.  Travis is “leading his swing with his hips” instead of his back elbow (this is also known as “flying open”).

In the above photo you can see the arrow points to Snider’s right hip which is already in motion while the bat is still on his shoulder and his hands have not yet begun to move.  Because of this problem,  Travis is only able to hit the high fastball over the plate or pitches down and in.