Travis Snider is not MLB ready at this point.

Firstly, Snider isn’t a player that’s been up and down, acquiring a number of at-bats at high levels of play. Take someone like Adam Lind. He pretty much needed to be called up when he was last season, as he has dominated the AAA level during his career and didn’t have anything left to prove. Snider on the other hand has less than 75 plate appearances at the AAA level. I say give him some time to concentrate of cutting down on his K’s or at least work on his defense, as he spent a good portion of the 2008 minor league season in the DH role. 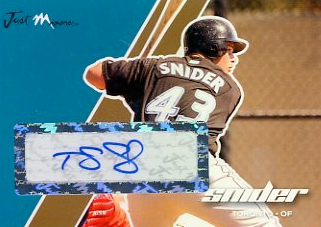 The second reason is something I’ve touched on a many times before, the arbitration clock. I suspect Snider will struggle in the first half of 2009 and I’d much rather save his cheap MLB pre-arb play for a more productive time. Plain and simple. With the Jays seemingly counting pennies these days, saving Snider is a sound business decision.

With the re-tooling on the Yankees and Red Sox, the improved Rays and the under-rated Orioles, now is just not the time to be throwing away pre-arb playing time on a player that HAS to regress in BABIP and overall production at the beginning of the 2009 season. The Rays (Longoria) and the Reds (Bruce) did a great job of working the arbitration rules to their favor. Time for J.P. to do the same.