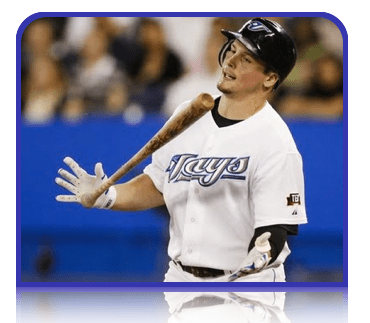 Back in August of 2006 we wrote the following in a Travis Snider prospect bio:

if we had to pick on one thing it would be his walk to strikeout ratio against lhp, at a rate of 20:4… this is a small sample and quite a small sticking point for a player that slugged .609 against left handed pitching… it will be an interesting area to keep an eye on in the near future.

Does three and a half years qualify as the near future? Better late than never, let’s look into Travis’ strikeout rate vs lefties.

A few of the OPS rates are pretty awesome. Unfortunately he’s striking out against lefties at an astronomical rate. Here are his career splits, including OPS & strikeout rates

According to fangraphs pitch value metric Snider can handle a fastball, yet has trouble with off-speed pitches. Hardly a newsflash to anyone that’s watched Snider over the past couple of years.

To be fair Snider rocked southpaws in the PCL this past season to the tune of a 1.2+ OPS in a limited sample. But once again the strikeouts reared their ugly head, with 14 K vs only 6 BB against southpaws.

I’m not ready to jump of a bridge just yet. He’s still young and will hopefully develop more patience on off-speed pitches from southpaws. And even if he continues this trend he can still be productive. A lofty comp, but still a comp, is Ryan Howard. Howard had a 1.086 OPS vs righties and a .653 vs lefties. He also had a very similar 2ish K/BB rate vs righties and 3.75 rate vs lefties.

Snider’s development vs lefties is high on my list of things to watch in 2010. Hopefully Cito does the right thing and gives Travis his fair share of AB’s vs southpaws.