Trystan Magnuson wasn’t a natural. Far from it. A bit of luck, a lot of hard work and a some height allowed Trystan to pitch in the recent 2010 MLB Futures Game.

Trystan, born back in 1985, bounced around from town to town as a child. He was born in Vancouver, spent time in London, England, spent some time in Ottawa and ‘The Peg’ and eventually landed in Louisville.

His parents aren’t vagabonds, far from it. His father is a scientist that focusses on neurological research into brain and spinal cord injuries. This type of research was the primary driver in family moves.

Settling down in one place during his high school days, Trystan heard the “Michael Jordon Speech” more than once. He was cut from both his Sophomore and Junior high school teams. Eventually he earned a spot on his senior squad. While he did enjoy a decent level of success during his senior season, he did not gain the attention of college scouts.

Drawing upon his pedigree (and quite a bit of hard work) Trystan earned his way to the University of Louisville via an academic scholarship for mechanical engineering. He made the varsity baseball team as a walk-on and was number 15 of 15 on the depth chart. 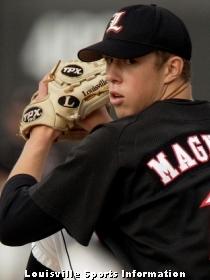 One has to believe that his height (6’7) and his non-athletic scholarship were main factors for his inclusion on the team. It certainly wasn’t due to his overpowering stuff. During his red-shirted freshmen year Trystan was topping out at 84-85 MPH.

Solid coaching and a series of changes to his mechanics slowly pushed his fastball up to the high 80s and then eventually to the low – mid 90s.

Towards the end of Magnuson’s college career he was closing for the Redbirds. In total he spent five years splitting time between the baseball team and the demands of mechanical engineering. He entered the draft at the age of 22, a disadvantage considering many collegiate players leave after their junior seasons.

Trystan Magnuson was drafted 56th overall by the Toronto Blue Jays in the 2007 MLB Draft, a compensation pick for the loss to Ted Lilly via free agency.

“He has a low-90s fastball and mid-80s slider that he has learned to keep down in the zone. His got ahead in the count with his fastball and used his slider as a chase pitch this spring.”

Since joined the Jays organization Magnuson has added another pitch, one of the new school split/changes that pitchers such as Mike Pelfrey are beginning to use.

Trystan didn’t pitch following the 2007 draft due to elbow soreness. He bounced back in 2008, pitching in 24 games in Low-A Lansing. All were “starts”, although each outing averaged less than four innings. For the season he allowed 91 hits, 35 BB vs 49 K in 81.2 IP.

Advanced to the Florida State League, Magnuson was moved back into the bullpen. He responded by holding opponents to a .248 batting average over 61.2 IP. He was moved up to New Hampshire late in the season for 5 games of work (scoreless).

This season he is back in NH.

(Side note: He is best friends and roommates with strikeout machine and workout junkie Tim Collins. If Trystan is joining him in the gym this relationship has to be viewed in extremely positive light)

It appears to be just a matter of time before Magnuson is called up to AAA Las Vegas. Due to his pedigree and advanced age it wouldn’t be outside of the realm of possibilities to see Trystan Magnuson wearing a Toronto Blue Jays uniform at some point during the 2011 season.

“My competitiveness is a big aspect of my game,”
“I like to go after the hitter, and make them hit my pitch.”

Magnuson was recently traded along with Daniel Farquhar for A’s OF Rajai Davis.  Here’s ESPN’s Keith Law on Magnuson’s value as a prospect: