Last night the Twins found themselves “victimized” by a poor ball/strike call. Here’s what went down, via MLB.com beat writer Kelly Thesier:

The Twins and Yankees were tied at 2 at the start of the seventh inning. Pavano walked the first batter of the inning, Jorge Posada, but he appeared to get the next batter, Berkman, to strike out on a 1-2 pitch. Yet, what looked to be a strike on television replays, home-plate umpire Hunter Wendelstedt called a ball. On the very next pitch from Pavano, Berkman doubled to drive in the go-ahead run for New York.
Gardenhire was ejected moments later, following a mound visit with Pavano, when he began arguing with Wendelstedt about his non-strike call on Berkman.

The strike zone is subjective to the umpire. Sure, in the rules it’s supposed to be called in a specific zone (but then again so is the ‘in the area’ doubleplay). Sometimes the zone jumps around. Deal.

The blown call on the Greg Golson shoestring catch in game one was worse IMO. Unlike the subjective nature of the strike zone, you either catch a ball or don’t. Golson caught that ball. The Yankees voiced their displeasure for a minute, but then, as professionals, they got on with the task at hand, winning the game.

Conversely, the Twins had a little fit after the Berkman ball call. Pavano frowned, Orlando Hudson supposedly jumped up and down like as if his XBOX broke, and manager Ron Gardenhire had a scowl and fews words for the ump.

Mind you Gardenhire choose to stay in the dugout after the call in question. He only voiced his displeasure after visiting Pavano on the mound after the Berkman hit.

Screen Cap before the toss But here’s the thing. The strike zone was inconsistent all night. According to Brooks Baseball, 31 ball/strike calls were blown (according to standard plotting). So if anything, both teams had to realize that the zone was all over the place.

Here’s the Berkman At-Bat from MLB Gameday. Notice that pitch #2 is waaaay off the plate, yet it was called a strike, which made the count 1-1 instead of 2-0.

Pitch #4, called a ball, was the “back breaker” for the Twins. 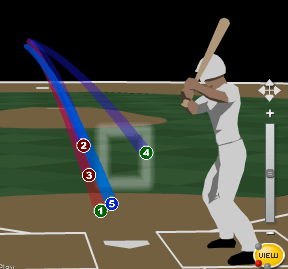 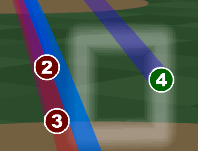 Was pitch #4 a strike. Yes. Was pitch #2 a ball. Yes. Both were called incorrectly. Both calls swung at-bats. Get over it…

Here’s another MLB Gameday pitch F/X box. This is from Joe Mauer’s 2nd AB in the 3rd inning. Both pitches #1 & #2 were called balls 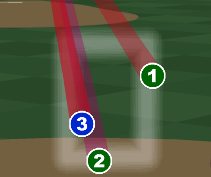 The location on pitch #1 is very similar to the Berkman pitch, isn’t it? I don’t recall the Yankees blowing a fuse.

Victimized by the Evil Empire

The Twins, the mainstream media, even Twitter had a hissy fit after the Berkman double. Minnesota “never recovered” from the blown call, dropping the game 5-2. The Twins are now ‘victims’ of the MLB conspiracy. Will this help them going forward? I doubt it, it hasn’t in past playoff showdowns with the Yankees.