In an exciting game that featured the return of sophomore pitcher Marc Rzepczynski the Jays eventually prevailed over the Twins 6-5.

Rzep cruised the first time through the order. Spotting a couple of basehits. He used three pitches well and had command of them all. In the fourth inning he seemed to get shaken when he narrowly missed injury on consecutive plays. He had to use Matrix-like moves to avoid a broken bat. The next batter saw him hit with a ball that looked to be off his foot. He struggled after that. After loading the bases with one out in the 6th Cito gave him a chance to get out of it but he yielded a Sac Fly that tied the game at 4-4. Shawn Camp angered up the blood when he gave up what I assumed to be the winning run after a Span single and an Hudson triple after retiring the first two Twins batters with ease. This seems to be the case with the Jays pen this year.

I remember last year, early in the season the Jays playing the Twins and noticing how bad the defence was. After listening how they went out and improved their defence with picking up the O-Dog, they still stink. Three bad plays can be attributed to the LF-CF tandem of Delmon Young and Denard Span. In the second inning Young dropped an Overbay drive. 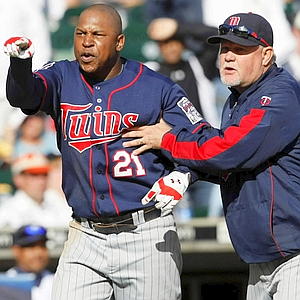 This was fortunate that Adam Lind was crossed up running the bases and was held at third. In the fourth inning Young misjudged a John Buck hit and had to jump to try to stop it from bouncing over his head at which he failed. This was scored a double, however I was thinking a single and give Buck second on the misplay. Then in the 5th a Bautista drive got between both fielders, Span and Young, BOTH dove for the ball. The ball rolled to the fence for the rare inside-the-park home run. Lastly, the Wells double to the wall that drove in the winning run could have been played better by Span. I am not saying these are not major league calibre outfielders but if they can’t make plays by the wall and are having communication gaffes this team may find themselves falling behind the Tigers or White Sox. If even one of these plays were made, the Twins might have been able to hang on. 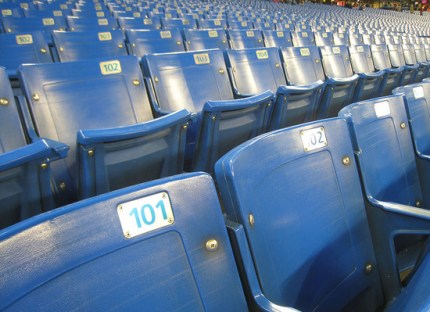 Below is a conversation between Security and Fans.

Fat fan with 2 kids: Ah leave them alone, they are just injecting some life into the crowd.

Security – I wouldn’t want them injecting “life” around my kids.

Fat Fan – No one would ever have kids with you.

Security – Why are there cigarette butts on the ground up here?

Girl – It wasn’t me. It was the guy in the black shirt sitting up there now. (points to suspicious looking charaters in the top row).

At this time security de-escalated the brewing lynching and briefly interviewed the Guy in the Black shirt and then left to resume watching their cameras to shake down pot heads.

All in all a good entertaining game. Good to see Rzep back. Jays may go to 6 man rotation to cut back on R Squared and S-Marc’s IP’s in what is starting to become another hopeless year in Hogtown.