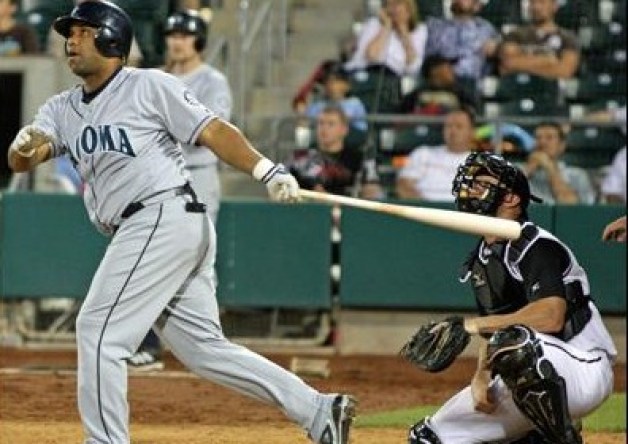 Dominican Republic native Victor Diaz is tearing up the Mexican League right now just as Randy Ruiz tore up the Pacific Coast League last season.  Like Ruiz, Diaz also had a cup of coffee at the major league level but never received any substantial playing time despite dominating all minor league levels.

Selected in the 37th round as an infielder in the 2000 amateur draftat age 19 by the Los Angeles Dodgers, Diaz was assigned to the Gulf Coast League rookie-ball level team.  Diaz quickly impressed by winning the batting title and was selected to the GCL postseason All-Star team.  At the end of the year he was promoted to single-A and in 2002 he won his 2nd straight batting title despite being promoted to AA Jacksonville mid-season.  That year he was also selected to play in the Futures Game of the All-Star weekend.  In a poll of league managers, Victor Diaz was named the league’s Most Exciting Player and was chosen as the best hitting prospect as well as having the best infield arm. 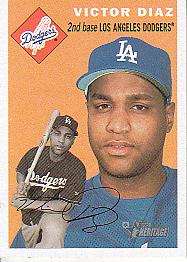 In 2003 Diaz was traded to the New York Mets mid-season for Jeremy Burnitz and spent the rest of the year at Binghampton of the Eastern League. 2004 saw Diaz promoted to AAA Norfolk of the International League and then on September 11th he was called up to the Mets.  In his first game, Diaz collected 3 RBIs when he hit a 3-run homer (off LaTroy Hawkins) with two outs in the bottom of the 9th inning on Sept. 25 vs. Chicago to tie the game at 3-3.  The Mets went on to win the game 4-3 in the 11th inning.  The Mets made him an outfielder that season and he appeared in 14 games (12 starts) in right field and finished with an .850 OPS for the Mets. Diaz was the Sterling Award winner at Norfolk; the award is presented to the team’s Most Valuable Player.

2005 was the year that Diaz had the most playing time, playing in 89 games.  He had 2 hitting streaks of 7 and 9 games respectively.  Despite having an OPS of .797, the Mets felt their OF was better served with the addition of Xavier Nady so Diaz was sent back to Norfolk for 2006.  His production slipped and he was dealt to the Rangers organization.

Victor Diaz played some ball in Korea before signing with Baltimore midway through the season and only appearing in 30+ games for their AAA affiliate. That winter Diaz played in the Dominican Winter League and was named MVP of the league while playing against Dominican major league stars.

Over his major league career he has played in 147 games – almost a full season worth.  Over that span he has hit 24HR with an OPS a hair under .800.  Is there not a market anymore for outfielders who can get on base and hit for power with great arms?

This season Diaz is hitting the cover off the ball: he’s had an OPS over 1.000 all season up until 2 games ago.  He leads the league in “counting stats” – home runs with 29 and RBI with 94.  He walks a tonne, but his greatest similarity to Randy Ruiz lies in his penchant for striking out.  In 32% of his at bats, Diaz is good for a whiff.  This could be one of the reaons that MLB teams are scared off from retaining Diaz’s services, however most sluggers not named Albert Pujols tend to strike out at a very high rate.

With the dog days of summer approaching and the injury bug beginning to spread around some teams with playoff aspirations, perhaps an MLB GM will be willing to take a flier on this power-hitting outfielder.

Speaking of Randy Ruiz – since we last checked in on him in the Japanese league he has performed much better, raising his average about 100 points.  One thing that jumps out to me is that in 100AB he has 5HRs… but ONLY 2 doubles! Not prototypical numbers from a power hitting first baseman.  He has also struck out in 39% of his at bats.  We’ll continue to monitor Ruiz’s foray into Japanese baseball as the season continues.