Victor Martinez hitting an even .400 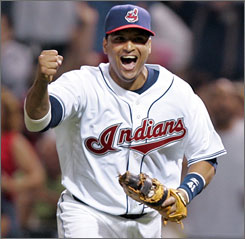 Catcher/firstbaseman Victor Martinez upped his average to .400 last evening, going 4 for 5. I’ve always thought that if anyone has a chance to hit .400 in todays current game its Martinez or Joe Mauer. Oddly enough both are catchers (well sort of).

A strong second half in 2008 forced the Indians to find a spot in the batting order for catcher Kelly Shoppach. With Ryan Garko having a poor season the Indians opted to split catching duties between Shoppach & Martinez and position Victor at first on days that he’s not behind the plate.

The knock of Victor has been that he’s tired in the latter months of the season. Will the decrease in behind the plate responsibilities combat this trend?

While Choo has been solid in the number four spot behind Martinez but outside of a half-season in 2008 he’s largely unproven. The lack of a true #4 hitter (unless Hafner can return to form or Matt LaPorta can quickly develop) may hinder the quality of pitches Victor sees as the season continues.

Ok, so Victor probably isn’t going to hit .400 this season. But he’s really improved on his approach at the plate (both current BB% and K% ratios are career bests), he’s also re-found his power stroke with 7 HR (only 2 last season) and is back to above 20% line-drive rates (24%) and is near his historical HR/FB ratios (14.3%). I’ll say this, if he’s hitting .350ish into September I wouldn’t be surprised.