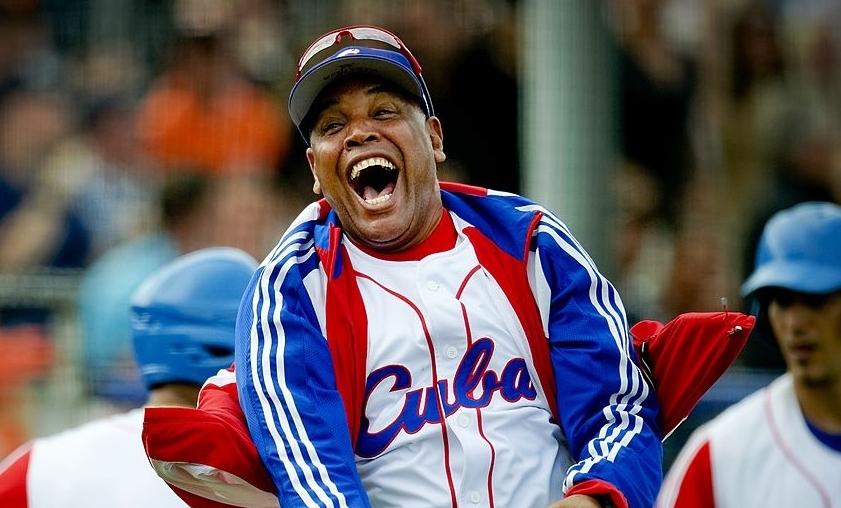 “Baseball is not just a sport but a show, by far the most attractive for Cubans.” – Victor Mesa

Victor Mesa is one of the most storied figues in Cuban baseball.  As touched on in Commie Ball,  Victor Mesa was the manager of the Villa Clara Orangemen of the Cuban National Series. “El Loco” (as he is called by fans, as well as “The Orange Explosion” and “The Show”) can be described only as a living legend. 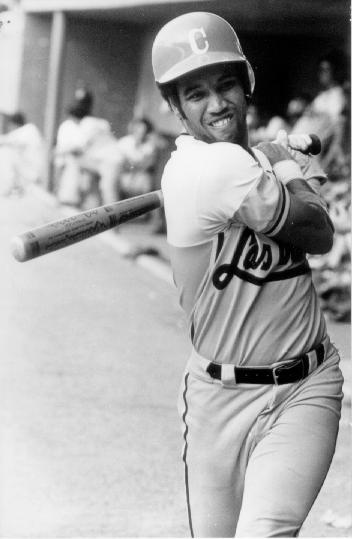 When Mesa was only nine years old, Cuban officials noticed him playing baseball in the streets.  He was immediately packed up and sent off to a baseball acadamy.  Years later Mesa began his career as a centrefielder who played like his hair was on fire.  No fly ball was too insignificant that he wouldn’t crash into a concrete and steel outfield wall to catch it.  A bona fide 5 tool player, Mesa played for 19 seasons in the Cuban National Series.  He stole 52 bases at age 35 – in a 90 game season.  Known for his “showmanship,” Mesa was once ejected from a game for pimping a home run too hard.  Not only would he regularly steal home but he would yell at the opposing pitcher while he was doing it.  This made him wildly popular with Villa Clara fans.

“He would have been more than a star in professional baseball,” says Eddie Oropesa, who surrendered to Mesa his 200th home run. “He was a show. He would do things other people wouldn’t even think of doing.” 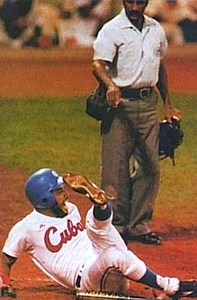 At international tournaments, Mesa was head and shoulders above the rest of the players talent-wise.  He was also the craziest.  At one particular tournament behaved in a curious fashion which was typical behaviour for him:

Once, Mesa was thrown out of the game before it even started:

The umpire was warning him in advance not to make trouble or come out on the field, to which Mesa replied, “Are you fucking blind? I’m on the field right now.” 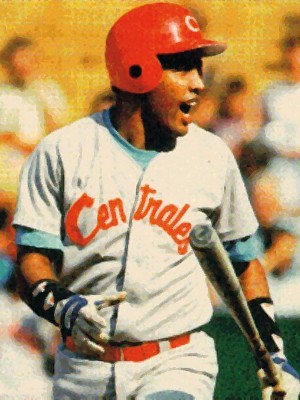 Mesa was the centrefielder for the Cuban baseball team in the 1992 Barcelona Oympics – the first time baseball was played as an official Olympic sport. Mesa was the first player to record a hit – a home run.  The Cuban team went on to win the gold medal.

As manager, Mesa has been known to come on to the playing field and physically remove players from the game that he feels aren’t giving their maximum effort.  The colourful manager’s tactics seem to resonate with his charges:  Villa Clara finished first in the Cuban League standings this season by a fair margin.

For the 2011 campaign, the Cuban Baseball Federation loaned Mesa to the Minatitlan Peloteros of the Mexican Baseball League.  They do this to discourage “group think” within the Cuban National Series as it allows managers and baseball personnel exposure to how the game is played in other countries. 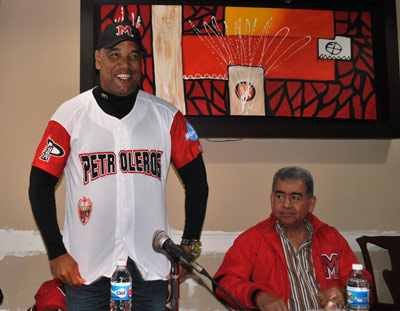 Mesa returned to Cuba this year and was assigned to a perennial also-ran in the Matanzas Cocodrilos.  Matanzas is the only team to have never reached the post-season since the Cuban National Series implemented their current playoff format in 1986.  Victor Mesa was indeed able to work his managerial magic on the Cocodrilos, guiding the young team to a first-place finish in the Occidental League, ahead of the storied Havana Industriales franchise. 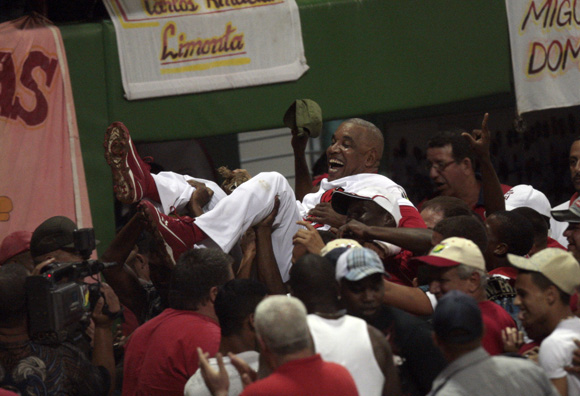 Mesa has had a profound impact on the team as well as the city.  Whereas in the past, a maximum of 200 fans would be in attendance, the Cocodrilo’s home ballpark of Victoria de Giron is filled to capacity for every game.  In the quarterfinals vs. Sancti Spiritus (and the talented Yulieski Gourriel), the Cocodrilos fell behind 3 games to 1 before storming back and winning the series 4-3 to advance to the semifinals vs. the Industriales.  It was maximum drama and classic Mesa.

Mesa sat down for a Q&A session with the Cuban national newspaper two years ago and I have haphazardly translated his answers into English.  Below are the highlights:

Q:  Many people did not know that you debuted for the junior team in Isla del Pinos in 1971.  Players who played against you hated you for your explosiveness and aggressive play.

A: I always played well and I played that way from watching players on television.  That’s why I disliked the players I was playing against.  To me, what I am interested in is going where I want and to do what I do.  I’m not worried about critics.  Sooner or later they will recognize that this is how you should play baseball – play hard, run out ground balls, always hustle.  I never stopped doing things well and was very dedicated to my sport. 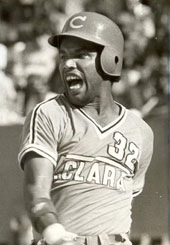 Q:  With all of your international experience, you played against some Major League stars.  Was there anyone in particular that you admired?

A: I liked base-stealer Rickey Henderson  because that’s what I liked best: hit and steal bases. For example, I remember that once in a game at the Estadio Latinoamericano I hit only 1-5, but I stole 4 bases and one of them decided the game. When I came out after the game people told me: “You’re finished!” Lie. I am not finished anything. I had learned to take walks and then steal bases.  That concept was not yet in the minds of the people, but I seemed to have done a lot with the stolen bases.

Q: Your happiest moments and the saddest?

A: I had many happy more than sad. From the happy I can mention being the Olympic champion in 1992, World champion in 1984 and several more individual leaderships I had in that event and, of course, having obtained the title because we are more interested in the gold medals than individual statistics. I don’t want to talk politics, but it is true that we played with the heart to give the gold medal to Cuba, our people and then the individual results were secondary . We worked for it and enjoyed that our people felt pleased. I say that to anyone who doubts this because sometimes people want to think that one is in a suit and tie or the high life, but I put them in due course.

The saddest moment was when I retired. 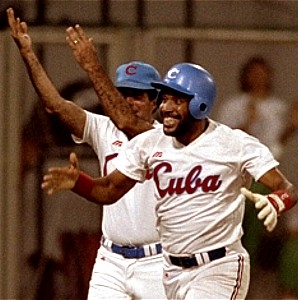 Q: From the beginning you were good hitter, but after your first ten seasons you greatly improved your swing, including the production of extra base hits. They say that numbers like these are unusual because a player’s performance is supposed to decline after age 30. What was your secret in becoming a better hitter over the years?

A: It’s true that I had better results in the second stage of my career. In baseball I was always ambitious, always wanted more and more. I never give up in baseball and every time I remembered my family, the sacrifices they had to make for me to play, where we had to start from, where we were,  the conditions of what we had to achieve.

National sporting performance drew me in to international events because the team had to make the world know that Cuba was known for baseball. I never gave up, something I explained to some friends of mine and several of them did not understand or would not understand, they gave up.  I would continue down the path that I had drawn up long ago.

Q: Internationally, what impressed you most or was more difficult?

A: The Americans, Chris Carpenter, Gregg Olson, Jim Abbott. As far as I can tell you, the hardest for me was with the tremendous curve from hell that Chris Carpenter had.  He was better than Olson and Ben McDonald.  Jim Abbott was another hard pitcher to hit and to his credit, he was missing part of one arm.

Q: What can you tell us about your time in Japan?

A: I learned discipline, to respect schedules, to have a positive attitude, many positive things at that point in my age and my career, something I had learned in my country. I had difficulty with the language, but I learned a lot about Japanese baseball.

Q: You played when the living conditions of the players were not good, you think that if these had been better, the performance of you and others would have been higher?

A: But we fought well and lived, though of course we would have been better, the conditions are the conditions. When man, the athlete, has the best conditions he has to be better.  We had to do what we could to achieve our goals. I had to leave my home in Sitiecito, Sagua La Grande. That’s where I’m stronger, so I’m not daunted by anything. Besides that all life had to struggle against many, and I still struggle against many and I have not stolen anything from how easy it easy and have done others. But it was better, because I’ve developed more.

Q: Do we have star players yet?

A: Yes, but you have to be caring. There are still many, do not worry about what is happening. The thing I will not mention any particular name so as not to create things, but for example, Yulieski Gourriel is a star. We must learn to care a bit.

Q: Would you like to send a message to the fans and readers of this interview?

A:  That Victor Mesa is still in Cuba, as when I was player, after the director and now coach, Right or wrong, I will continue to be in Cuba with balls. I’ve never been into anything other than being consistent with the country, but you have to do many things and I will continue to criticize what is wrong with our baseball. 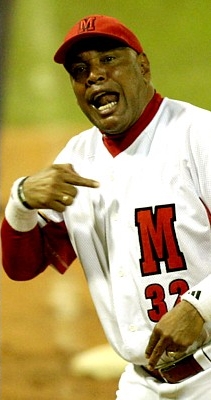 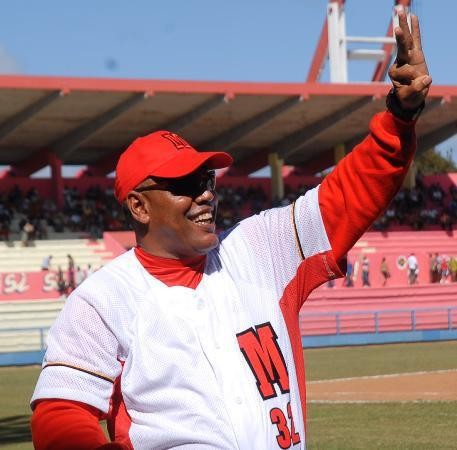