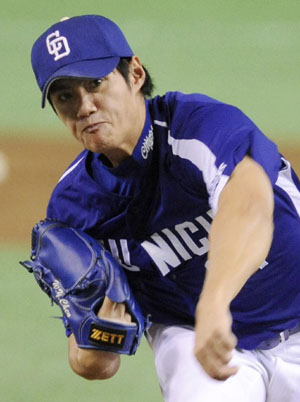 While the focus is on Darvish (and rightfully so), incoming NPB lefty Wei-Ying Chen is expected to be one of the top free agents arms available during the upcoming MLB off-season.

26 year old lefty with low mileage (he’s never reached 190 IP in a season), can dial it up to 95 MPH and will have no posting fee.

Chen is somewhat injury prone, having Tommy John Surgery in 2006, missing numerous games with leg, flank and various injuries over the past few seasons.

Using NPB tracker data, Chen has taken about two miles per hour off his average fastball this season, averaging around 89 MPH after clocking in at 91 MPH in 2011. This velocity drop could be by design or due to an injury. Chen missed roughly the first month of the season due to a ‘left adductor muscle injury’. Chen said the following while in late May: 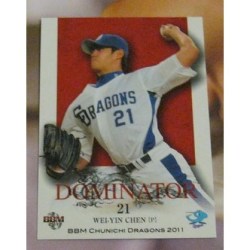 Chen finished the 2011 season with 163 IP, 135 hits allowed, 93 K vs 36 BB+HBP. He averaged right 98 pitches per start and avoided the insane Yu Darvish like in-game pitch counts. Chen threw 120+ pitches only twice during the season.

According to Patrick from NPB Tracker, the first quote from a start vs Darvish, the second a follow up viewing of Chen:

1. He fed Nippon Ham a strict diet of fastballs and sliders, showing great location and keeping nearly everything on the edges of the strike zone. To make an unfair comparison, he lacked Darvish’s velocity and movement, but he worked quickly, threw strikes, and knew what he wanted to do with each hitter.

2. The last time I watched Wei-Yin Chen he was extremely effective but I wasn’t sure how I felt about him as an MLB prospect. This start was a bit more confidence-inspiring. He showed a broader repertoire, working in his curveball and forkball, but more importantly I saw a little movement on his fastball that I had noticed earlier in the year.

A sticky situation without a concrete answer. Chen was born in Taiwan and thus a foreign player. Usually this would give him rights outside of standard national Japanese born player rights. However, his contract was written and signed with varying language and is far from cut and dry. The general assumption is that Chen will official ‘retire’ from the NPB if he cannot reach an agreement with his club, the Chunichi Dragons. This will give him the right to sign with any MLB club and he will NOT carry a posting fee. This makes the 26 year old rather unique, as he currently has only seven years service time in the NPB.

Unlike Tsuyoshi Wada, Chen’s project ability at the MLB level is very much in question. I truly believe that a teams expectations will dictate how Chen pitches in the MLB. Will a team let him be a ‘pitch to contact low 90’s lefty’ or attempt to turn him into more of an aggressive, strikeout style pitcher?