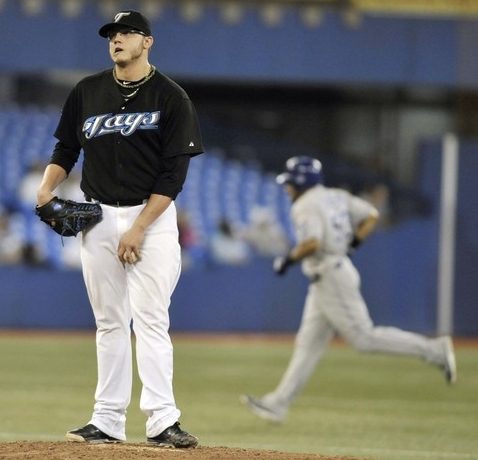 Brett Cecil.  You don’t have to go home, but you can’t stay here (in the rotation).

After leading the team in wins last season with 15, Brett Cecil’s performance regressed in 2011.  Struggling to find respectable fastball velocity, Cecil was demoted to AAA during the season to try to fix his many mechanical issues.  Cecil rejoined the team mid-season but it was still the same old story.  He finished with a 4-11 record and 4.74 ERA.  Brett also gave up a preposterous 37 HR in a combined 200 minor and major league innings. 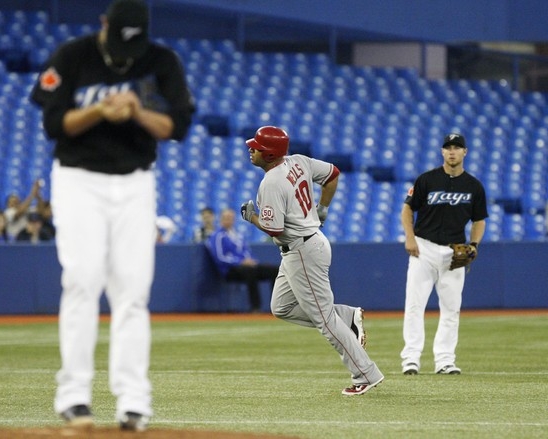 It has been speculated that Cecil’s failures can be attributed to the fact that he has adopted Jesse Litsch’s diet of street meat and Special K.

From the Globe & Mail:

This season Cecil, who is on the chunky side and listed at 6 foot 1, 235 pounds in the Blue Jays’ media guide, finished with a record of 4-11.

Farrell was asked directly if he felt Cecil was not in the best of shape heading into the 2011 campaign, and the manager said that wasn’t the case.

“When we went through all the conditioning in spring training and all the throwing, there wasn’t the need for added rest or a physical ailment that would have suggested that he wasn’t prepared coming into spring training,” the manager said.

Even Cecil said after his final start of the season on Sunday, when he lasted just 3 1/3 innings and was roughed up for four runs off five hits in a 5-2 Blue Jays loss to the Rays, that he plans on intensifying his approach to physical conditioning over the coming months.

“As far as working out, this season’s going to be big motivation for me in the off-season,” Cecil told reporters. “I’m going to work my ass off, work harder than I’ve ever worked before.”

Farrell said: “The most important thing in the off-season is overall strength and conditioning.”

True, Cecil is not an impressive specimen, physically speaking.  There are a long line of MLB pitchers who have experienced prolonged success while carrying around a few extra lbs. on their frame (David Wells, CC Sabathia, Bartolo Colon, Babe Ruth, Fernando Valenzuela, Bobby Jenks, Jonathan Broxton).  I don’t think it is Cecil’s spare tire that is holding him back.

It wasn’t long ago that we were debating who was the better pitcher: Brett Cecil or Tommy Hanson.    Today?  The choice is clear – Tommy Hanson.  How did Cecil fall off so precipitously?

The difference between Cecil and Hanson today, in my mind, is consistency in pitching mechanics.  Hanson is able to repeat his delivery to keep the ball down and maintain his focus from pitch-to-pitch.  Cecil clearly cannot.

From the  New York Times:

“Today was the same issue,” Farrell said. “Inconsistent location throughout a given at-bat. When he made a mistake up in the plate, he paid for it. When the order came back around, I felt we needed to make a chance to give us a chance to come back. We were hopeful that this would have been an outing where he could go into his off-season and springboard off a positive thing.”

The “same issue” that Farrell refers to is the issue that has plagued the young lefty the entire season:  Cecil’s propensity to elevate his fastball on the reg.

If a pitcher elevates his pitches on the reg, he will yield extra-base hits on the reg.  That is a fact. 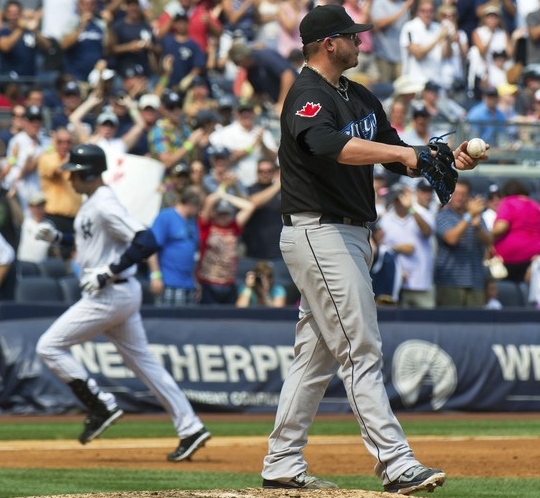 For me, the most apt comparison to Brett Cecil is fellow left-hander and former Toronto Blue Jay Marc Rzepczynski.  Both pitchers throw 4-5 pitches as starters with effective sliders and plus changeups.  As starters, both struggle with finding consistency in their deliveries.  In 2010, Rzep began to unravel and the Tao of Stieb took note:

Marc Rzepczynski’s output this year has been bad enough to make us forget how to spell his name. His mechanics, which were very tight last season, look completely messed up now. Last year, he threw a lot of strikes down in the zone to keep things under control. This year, he’s having a hard time getting anything where it should be.

Especially telling was the pitch Rzep threw after a mound visit from José Molina with two balls and the bases loaded. After all of the shoulder rubs and “just chill and throw strikes” that his catcher could offer, Rzep still let his lead shoulder fly out and threw a mid-80’s fastball a foot outside. Not good.

In 2011, the Blue Jays streamlined Rzepczynski’s arsenal by having him focus on his fastball and changeup in the Arizona Fall League, then moved him to the pen to start 2011.  In this role, Rzepczynski thrived – becoming the go-to left-handed reliever out of the Blue Jays’ bullpen.  So much so that Jays fans – and even John Farrell – were throwing around lofty Scott Downs comparisons.

Downs spent six years with the Jays, posting a 3.13 ERA while working in various relief roles, including setup man. He signed with the Angels as a free agent in the off-season.

“If there’s anyone that’s close to replacing Scott Downs — and I don’t know if you fully replace a guy as talented as Downs was — Zep is the closest thing we have to that,” manager John Farrell said. 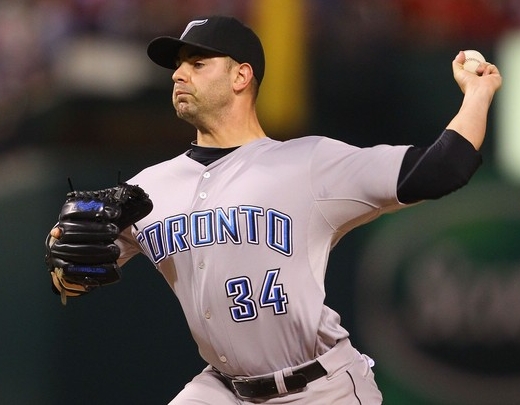 From my experience as a pitcher in the low-level bush leagues of Canada, I can tell you that the mindset of a starting pitcher is very different than that of a reliever.  Starters must pace themselves to go deep into games, as well as having to be able to command 3, 4 or 5 pitches to be able to give a different look to hitters when facing them 3-4 times in a game.  Pitchers sometimes lose focus on the hitter at hand; they will think 2, 3, 4 outs ahead and make mistakes or waste pitches.  Fatigue sets in after multiple innings and adjustments have to be made to maintain a consistent delivery.  Not every pitcher can do this – especially if he’s not in shape, as the case may be with Cecil.  Fatigue causes pitches to be left up in the zone.  As well, the task of commanding that many pitches can be difficult and/or overwhelming.  These three factors combined often end up in this scenario: 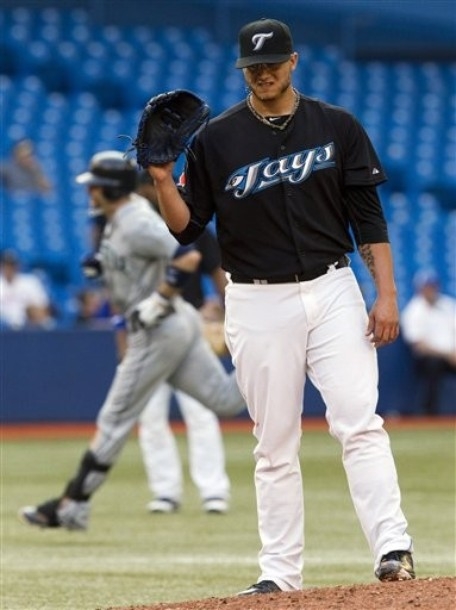 Brett Cecil needs to be put in a role where he has the best chance to succeed and in a role in which he’s had success in the past: the bullpen.  In college, Cecil was the closer because he threw the hardest on the team.  From the Batter’s Box:

Batter’s Box: BB. At the start of this year, before the injury, did you have any specific goals for this year?

Brett Cecil:  Nothing specific, just stick to the mechanics.  They want me to speed up my wind-up motion which is understandable because it is kind of slow I guess.  I was a closer in college and when you are a closer you can be a little more deliberate in your delivery.

To be sure, a college closer does not an effective MLB reliever make, but being more deliberate in his delivery is exactly what Cecil needs to do.  Like Rzepczynski before him, in a relief role Cecil can go max-effort on every pitch and not have to worry about being gassed by the 3rd inning.  Fastball velocity should no longer be an issue, conditioning or no conditioning.  By eliminating the sinker, curveball and slider, Cecil need only be concerned with consistent mechanics for 2 pitches instead of 4 or 5.

For the Jays to extract any value out of Cecil, he needs to be tossed into the pen to battle it out with Luis Perez to be the first lefty out of the pen, or at the very least he could become a LOOGY (Lefty-One-Out-GuY); left-handed hitters batted .186 when facing Cecil on the season.  The best thing for both Cecil and the Blue Jays is to put him in the best position to succeed.  Otherwise we are in for another season of this: 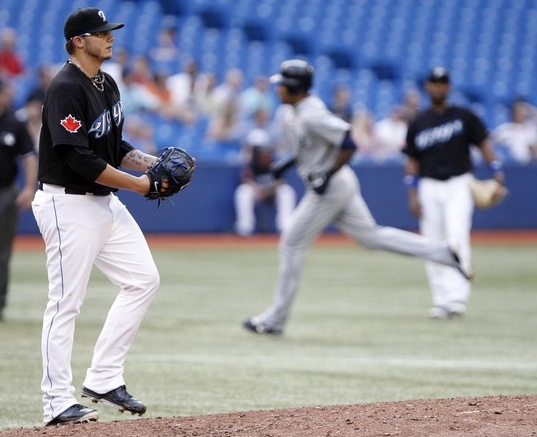 Images courtesy of Getty Images, the Associated Press and Reuters .