Watching Brandon Morrow’s last start versus the Tampa Bay Rays, I couldn’t help but notice that CB Bucknor was doing his best Omar Lucero impression.  He was very animated in punching out those Rays hitters who watched strike 3 sail by, but it was the actual strike ‘calls’ that got my attention.

Having watched many games this season, both Blue Jays and out of market games, I can speak to the fact that most umpires have similar strike calls – Vic Carapazza being one of them. 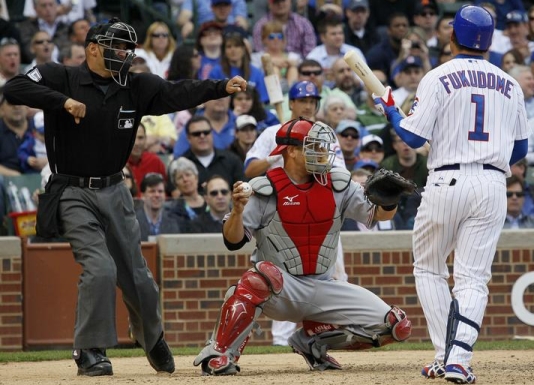 Umpires don’t simply say “strike” or “steeeeerike” like they do in the lower levels.   In a game that prides itself on suppressing the expression of emotion and exuberance, it seems strange that the umpires are the ones who are the most animated on the field.  A called strike three has become a gutteral moan, a form of Primal Therapy that sounds nothing like the word ‘strike’ – “HOOOOOOO HAAAAWWWWW!” Take Tom Hallion, for example.  It sounds like he is being stabbed in the guts with a rusty sword:

How did strike three evolve into THAT?

It actually begins in the mid-level minor leagues.  In umpire school, prospective umpires are taught to focus solely on the fundamentals, but as they advance through the minor league system, their supervisors and trainers actually encourage them to exhibit some panache and flair in their calls.  Umpires are just like the minor league players whose games they call:  if they don’t stand out, they won’t get noticed and therefore won’t receive a promotion to the higher levels. 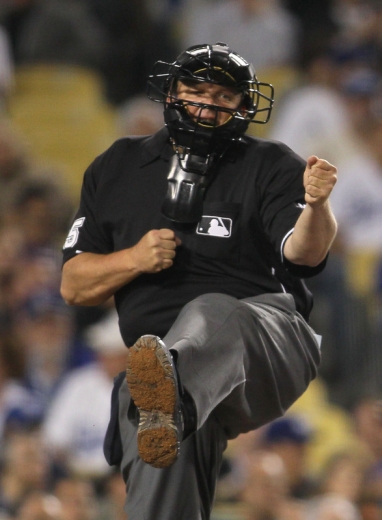 As I mentioned before, in a game where any sort of show of enthusiasm will be misconstrued as “showing up” by sensitive ballplayers, umpires have to toe a fine line or risk being berated by those said ballplayers – even moreso than they normally do.  Of course, those players who include flash as part of their game will respect it when an umpire incorporates it into his.  Says former Toronto Blue Jay Orlando Hudson:

With that said, if you’re going to turn your strike three calls into an intepretive dance art form like CB Bucknor does, you had better be sure that you are getting your calls right.  Bucknor was rated as the worst umpire in all of baseball according to ESPN Magazine in 2010.

Images courtesy of Victor Decolongon/Getty Images and the Associated Press