This summer marks the 6th anniversary of Mop-Up Duty’s existence.  Although we’ve been blogging since the beginning of 2006, our archives only go back to August of that same year.  While it is extremely painful to read the kind of writing we were putting out six years ago, our hearts and minds were still in the right place.  The first post that really got our name out into the blogosphere – thanks to the Batter’s Box allowing us to pinch-hit – was Matthias’ article comparing Canadian first basemen Bill Phillips and Justin Morneau. Using Win Shares, Matthias concluded that even if Morneau retired then (in 2006), he would have been the greatest Canadian first baseman of all time. Of course, the bright and informed readers at the Batter’s Box made many valid comments:

Nice analysis and article, but I respectfully disagree.  Morneau’s career is just too short at this point to declare him better than a man with a 10 year career IMHO.  You say Morneau has had two exemplary seasons, but I only see one.  This year has been great for Justin, but in 2005 he finished dead last among “qualified” MLB 1st basemen, in AVG and OBP.  In 2004 he had less than 300 ABs.
– Ryan C

I don’t think if he retired today you can say, “he’s the best all-time because if he had continued to play his numbers would have been the best.” I DO think you can conclude he has more talent if you like…. but “best all-time” has a cumulative factor to it.  I agree that at the rate he’s going, he may only have to succeed for 3-5 more years to become the best all time even in the face of a longer career by Phillips…. but in my opinion, not yet…
-daryn

Since then, much has changed.  Justin Morneau has dealt with numerous concussion and injury issues.  He’s also currently in his 10th MLB season – the same number of seasons that Bill Phillips played.  In addition, a new wrinkle has been added to the argument with the emergence of a new superstar Canadian first baseman:  Joey Votto. On Mop-Up Duty’s sixth anniversary, we ask again: who currently stands as the greatest first baseman ever produced by Canada? 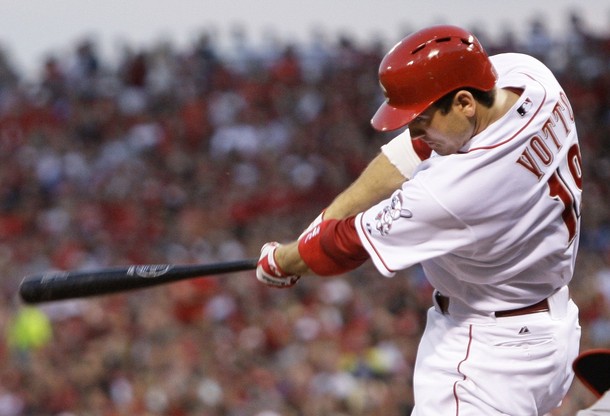 Looking back to the original article, Matthias first looked at player adjusted averages and then used Win Shares to compare the two players.  Win Shares assigns a single number to each player for his contributions for the year. A win share represents one-third of a team win, by definition.  If a team wins 80 games in a season, then its players will share 240 win shares.  All pitching, hitting and defensive contributions by the player are taken into account. Statistics are adjusted for park, league and era.  Based on a 162-game schedule, a typical All-Star might amass 20 win shares in a season. More than 30 win shares (i.e. the player is directly responsible for 10 wins by his team) is indicative of MVP-level performance, and 40+ win shares represents an exceptional, historic season.  Win Shares was the most relevant statistic for comparing Morneau to Phillips available at the time of the article.  Firstly, let’s look at the adjusted averages of the players:

From the original article, Matthias had this to say about Bill Phillips:

Note that these career stats are adjusted for park values against league average. For his career, Phillips BA was .09 higher, his OBP about even, his SLG .30 higher, and his OPS .29 higher. While this proves that Phillips was an above average player for his time, he was hardly a breakout superstar.

and on Justin Morneau:

This season Morneau is hitting .318/.370/.592 for an OPS of .962 (as of August 18th). The American League average OPS is .780 as of August 18th, according to The Hardball Times. Morneau’s OPS has yet to be park adjusted, but his OPS should be around .150 higher than the league average. I think that it is safe to say that, barring injury, Morneau should remain around an OPS of at least .850 for the next 7 – 10 years, which should put him well above the league average.

It turns out Matthias was right.  Morneau has posted an OPS of at least .850 for five of the last seven seasons, and he currently sits within shouting distance of .850 this season. 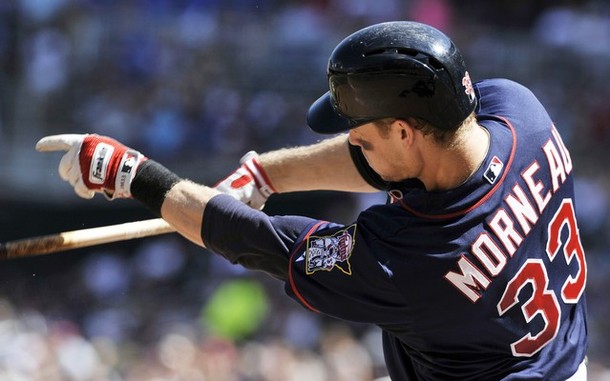 But look at Joey Votto.  He’s come along and completely obliterated the lgOPS and has kept up his torrid pace since he entered the Majors at age 23. When comparing these three players, I think it’s most useful to look at OPS+.  It’s my go-to stat for quick player evaluation and this is why: OPS+ does a really nice job of smoothing over the differences in ballparks and offensive eras. OPS+ is OPS measured against the league average, and then adjusted for ballpark factors. An OPS+ over 100 is better than average, less than 100 is below average.  Without it, it’s just so difficult to judge raw numbers without some sort of context to link the different eras and ballparks.  Now, when we compare the three players, it gets a little bit dicey.

From looking at OPS+, it’s clear that Bill Phillips is only moderately better than the league average.  Both Morneau and Joey Votto have put up eye-poppingly impressive single-season OPS+ numbers.  Votto has a considerable advantage over Morneau when it comes to career OPS+, however, Morneau is penalized for his injury-addled 2005 and 2010 seasons.  Morneau has been somewhat inconsistent in his year-to-year production and Votto has been consistently studly.  If he keeps it up for another 4-5 seasons, I believe Votto is the clear winner for the greatest Canadian first baseman – from an offensive standpoint, anyway.

*As an aside, take a look at Joey Vottos BAbip numbers.  Wonder why they’re so high?  According to batted-ball data at Fangraphs, Votto has hit exactly one infield pop-up since 2009. Once for more emphasis: in almost three seasons, he’s tallied one solitary infield fly.  On top of that he has only ever pulled one foul ball into the stands in his entire big-league career. 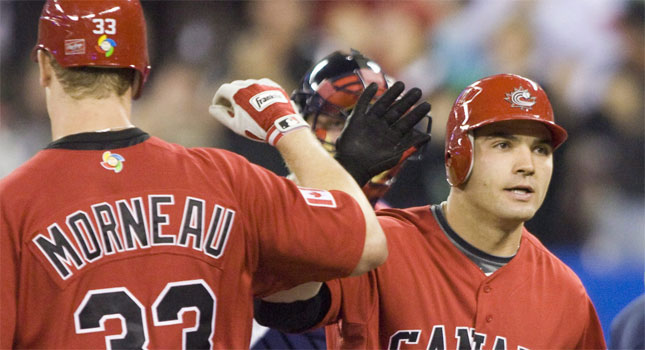 Moving on to Win Shares.  Since the original article was written in 2006, the zeitgeist of statistical evaluation has shifted considerably. In 2008, stats guru Tom Tango introduced a statistic used to evaluate player value known as WAR, also known as Wins Above Replacement.  The term replacement is defined as the talent level for which you would pay the minimum salary on the open market, or for which you can obtain at minimal cost in a trade.   WAR calculates the amount of wins a player adds to his team compared to the contribution that would be expected from this abstract replacement-level player.  WAR is now the de rigueur statistic used to evaluate player value; many baseball statistic websites no longer even calculate Win Shares.

Currently, there are two versions in general use: one at Baseball Reference (bWAR or rWAR) and the other at Fangraphs (fWAR).  The difference between the two lies in the way they calculate the value of a player’s defense.

Baseball Reference uses Defensive Runs Saved, a defensive metric that takes into account eight different factors, including defensive shifts.  Fangraphs, on the other hand, uses Ultimate Zone Rating in order to calculate defense.  UZR is an advanced defensive metric that uses play-by-play data recorded by Baseball Info Solutions (BIS) to estimate each fielder’s defensive contribution in theoretical runs above or below an average fielder at his position in that player’s league and year.  The trouble with UZR is that it is really only useful in the context of a three-year span.  There are also other flaws associated with the stat that make it a less-than-reliable statistic.

While neither version of WAR is perfect, my personal preference is to use Baseball Reference’s version.  I’m not arguing here that bWAR is any kind of exact measurement, but I believe it is directionally correct, and it’s a useful metric for this type of superficial analysis.  To put the WAR values into some context, this is Baseball Reference’s evaluation:

Most regular position players will accumulate 3-5 WARP over a season. A legitimate All-Star-caliber player may have over 7 WARP. Over 10 WARP is a strong MVP candidate, while over 15 WARP is a “one-for-the-ages” season. On the flip side, a player with -1 WARP or less is probably in danger of disappearing from baseball.

Now then, the career bWARs for Phillips, Morneau and Votto: 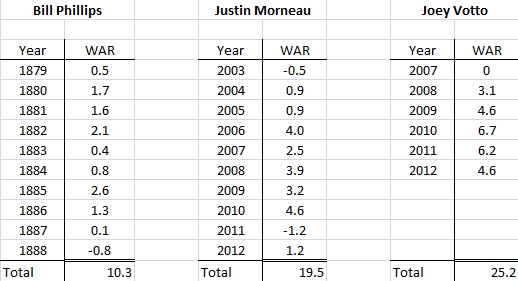 Again, we see that Bill Phillips was only moderately better than a replacement-level player.  Morneau has been a consistently good player, save for his 2011 season in which he was plagued with concussion symptoms.  Votto, however, has proven that he is a star.  While Morneau has never achieved a single 5.0 WAR season, Votto already has two seasons of 6+ WAR.  Furthermore, as we can clearly see, Votto has a higher career WAR than Morneau, while having played for only six seasons compared to Morneau’s 10.  According to WAR, if both Morneau and Votto retired today, Votto would be the greatest Canadian first baseman to have ever played the game.

Now that we’ve calculated respective player values using the stat of the day, let’s try something a little different.  In this instance, we’re not trying to build a roster – we’re trying to find out which player is the best.  For this reason, WAA (Wins Above Average) might be a better metric for me to use than WAR. I’m not so much interested in whether these players are so much better than the replacement players of of their day. I’m really interested in how much better they are/were than everyone else. I find WAA is a better way to measure how much a player was better than “everyone else,” especially in the case of Bill Phillips who played in a completely different era. 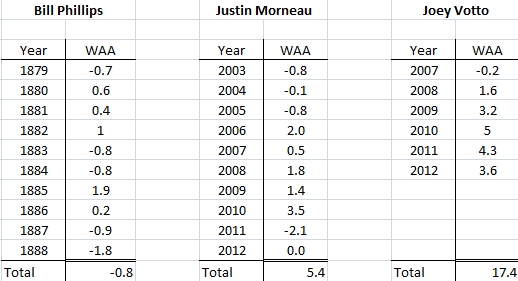 It’s clear that Bill Phillips was a league-average player throughout his career.  In fact, he probably shouldn’t even be in the discussion for greatest Canadian first baseman of all time.  Morneau has been a decent upgrade on a league-average first baseman, however, Joey Votto has been spectacular.  In his six career seasons, Votto has provided three times as much value as Morneau has in his 10 seasons.

After taking into account league & park adjusted averages, OPS+, WAR and WAA, it is clear that Joey Votto is the most talented Canadian first baseman to have ever played the game.  Thanks to WAR and WAA, we can reasonably conclude that even if both Morneau and Votto were to retire today, Votto is the best first baseman this country has ever produced.  However, as I write this today, Joey Votto currently sits on the disabled list after undergoing knee surgery.  He’s had a setback in his recovery, having to undergo yet another procedure on his knee.  Should this knee injury become a chronic condition for Votto over the next few seasons, the player-value playing field may even out between him and Morneau.  As it stands now, Votto is the greatest – but will he remain in that position?  Check back in four years time. 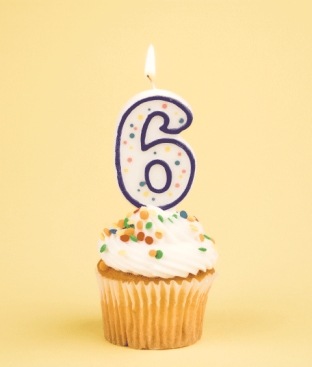