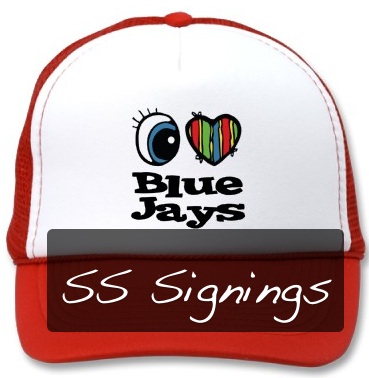 Jays fans over on Twitter are shitting all over the signings. For my money (and AA’s) the Jays signings are value plays.

I wrote a little something something about Alex Gonzalez the other day in the article Jays FA SS Wish List. Here’s a cut & paste for those who missed it:

Alex Gonzalez…lack of Type A designation makes him an attractive option to teams looking for a new SS. This could raise the overall market price. Boston declined an option on Gonzalez for $6 million back on November 8th. Alex has a good glove (around 2009 Scutaro level) and some power potential (he’s hit 14, 16, 18, 23 HR in the past). Depending on the price level the Jays should make a play for Alex. He’ll be 33 on opening day. A two year contract around $8 million ($4 a year) may very well get the job done.

Two years at $8 million seemed reasonable. But AA got what I think is a hell of a bargain for only a one year guarantee with a club option.

I’ve gone over the whole process of WAR (see article and comments section). To sum it up, basically WAR valuations numbers can be waaaay off with some signings. If Alex is able to post his 2.0 WAR his overall value to the Jays should be somewhere around $10 million (at a $2.75 million contract). Again, these numbers should definitely be taken with a grain of salt.

The second half of the 2010 shortstop solution is John McDonald. Johnny Mac came cheap at 2 years and $3 million. He should see time at SS and I imagine 3B in late inning lead situations (to counter the below average EE defence). McDonald has familiarity with the organization and the fan base. He’s also proven himself to be a “good solider” when it comes to being a bench hand.

“It’s really important,””In this division, the one thing we can’t do is give away outs, especially when you look at some of the lineups. …
“There’s no doubt we’d like to have a long-term solution with respect to someone who could be here for multiple years at a time and be part of the next core of players, but we’re very excited to have Alex and we like the flexibility the contract gives us.

Let’s think back to 2008. The Rays brought in a light hitting SS in Jason Bartlett. For the season he posted a mighty .690 OPS. And guess what? The Rays win the AL East and go on to the World Series with a light hitting SS. It can be done.

So at the end of the day the Jays will spend about $4 million at the SS position. For this they should receive above 2.0 WAR, which on the open market is worth about $10 million. I’d expect the 2011 option on AG to be exercised.

This gives Justin Jackson time to develop. If he continues on his current path (pretty much down the shitter) the Jays can bring in a SS prospect via the inevitable Roy Halladay trade or perhaps in an Overbay swap.

This is the new reality. The Jays are skipping the long-term contracts and focussing on developing a core of young talent. In the meantime they’ll plug in ‘value’ stopgaps and avoid committing too much capital. They’ll (hopefully) take the savings and pass it along to scouting, draft bonuses and perhaps an international prospect signing or two.

And for some reason this pisses Jays fans off. Brian Burke’s similar vision was bought in and praised by the Toronto media & fan base. Conversely AA and the Jays are viewed as a bunch of cheapskates waving a white flag. What gives?