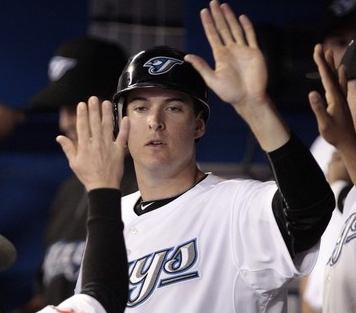 Is it set in stone that the Blue Jays will offer Kelly Johnson arbitration for 2012? I don’t think so.  Here’s why:

This morning I was on Twitter, spitballing about who would be Yunel Escobar’s double play partner in 2012.  Thinking out loud, I suggested that the Blue Jays should bring back Orlando Hudson in a trade with the Padres. 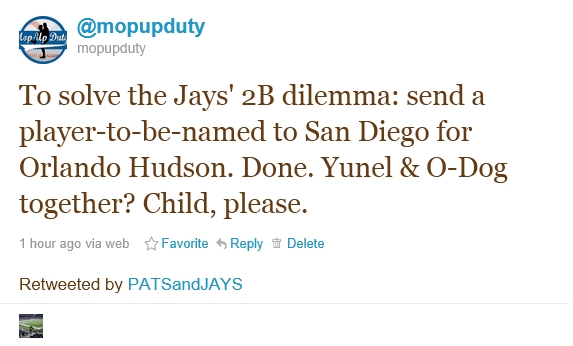 But what if he were to accept?

True, Johnson hit 26 HR a year ago, and 21 HR last season.  It’s possible – though not probable – that he could improve on those power numbers as he enters his 30th year.  That said, his 20+ HR pop is accompanied by an OBP of .303 and .304 in 2 of the past 3 seasons.  In other words, he makes outs like it is his job.  A player’s penchant for making outs is often overlooked.  Out-making kills rallies.  It squanders opportunities to move runners over.  It kills the ability to step on a pitcher’s neck when he is on the ropes.  It offsets the net gain from the odd home run here and there.  On top of that, most of his outs are strikeouts – the worst kind of out in baseball.  And we haven’t even taken into account Johnson’s lacklustre defense.

Keith Law had this to say about Johnson in his annual Top 50 Free Agents Report:

Johnson has become an all-or-nothing player over the course of his career, with wild swings in his batting average on balls in play that result in part from trouble maintaining a consistent swing. What saves Johnson is that he works deep counts and has above-average power so that even in a down year such as 2011, he’s contributing something on offense.

He has a sound swing when he’s right, but he tends to lose confidence quickly and overcompensate, especially in two-strike counts. And since he is such a patient hitter, he sees a lot of those deep counts. Once he’s behind, he’s more likely to chase off-speed stuff. He is fringy at best at second base but would be above average to plus if he returned to left field, a position where, in good years, his bat profiles fine. He’s a great high-risk/high-reward candidate on a one-year deal or even a two-year deal with a lower base pay and some incentives.

Alex Anthopoulos will have to do a cost/benefit analysis of what it means to bring back Kelly Johnson.  What is the likelihood that Johnson refuses the Jays’ arbitration offer and finds a team that is willing to give him more money or a longer-term contract?  I would say that the chances of that are minimal.  As GM of the team, would you want Johnson patrolling second-base with his fringy defense and propensity to make outs in 2012 while eating up $6 million of the payroll?

In Orlando Hudson, you know what you are getting: a slick-fielding defender who still has some speed (he had a career-high 19 stolen bases last season) and the ability to get-on base at a reasonable clip.  This fits well into the Farrell-ball philosophy.  Having finished an injury-riddled sub-par season, Hudson is due $5.5 million by the Padres.  The small-market (or at least small payroll) San Diego team would probably love to offload the Hudson contract (one that includes an $8 million 2013 team option with a $2 million buyout).  This would give the Padres a chance to get a long look at their #1 second-base prospect in Logan Forsythe.  Alex Anthopoulos could likely obtain Hudson for a song, while getting San Diego to eat some salary.  A healthy Orlando Hudson could reasonably put up a 2 – 3 WAR season, as he posted WARs of 2.0, 3.7 and 2.5 in his last 3 healthy seaons (2010, 2009, 2007).

Can you imagine a Toronto infield with the panache and flair of Yunel Escobar and Orlando Hudson?  I salivate at the thought. 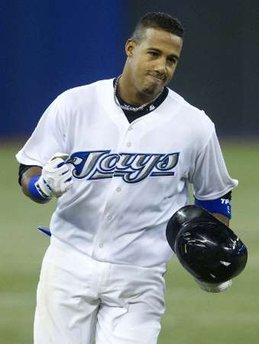 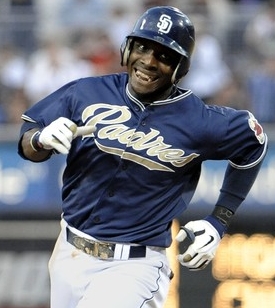 I concede that in both their primes, Johnson is a better player than Hudson.  That said, I believe in Hudson’s consistency while I don’t believe in Johnson’s ability to recreate the success he experienced in seasons gone by.  To me, Kelly Johnson is an Alex Rios:  sure, Alex had good seasons in 2007 and 2008.  Will he ever do it again? No.

As a stop-gap measure, Hudson would serve to help the young pitching staff with his above-average defense and infectious enthusiasm for the game.  He would fit in well with the magic chemistry that exists in the Jays clubhouse.  Even if the Jays are not yet ready to contend, he will be an injection of defensive studliness that will keep bums in seats and TVs tuned to Rogers Sportsnet.  An injection sorely needed after the departure of John McDonald.