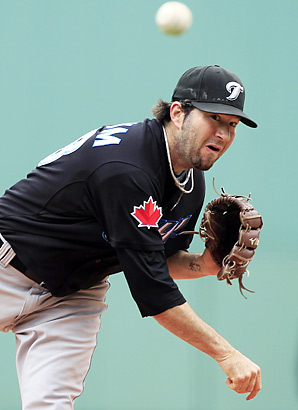 Don’t get me wrong. I love Shaun Marcum. But I still wonder, if Shaun Marcum where a three year college player entering the 2010 draft, would he even be a high pick?

Marcum’s fastball clocks in at an average of 87 MPH. This is the fourth slowest speed from a starter in the AL (100+ IP) and the second lowest from a RH starter.

According to Fan Graph pitch values Marcum uses his fastball as a loss leader, it’s score (which is negative) ranks 36th out of 39 AL starters.

On the other hand his change-up registers +17 runs, making it one of the top 10 pitches overall in the AL (starters only) and the second best non-fastball pitch outside of Francisco Liriano’s slider.

All things considering Marcum’s 7.5 K/9 with an 87 MPH fastball is extremely impressive.

But back to the title of the article. Would Marcum get drafted in 2010?

Most organizations and scouting services make up a sheet including:

Typically the following pitch and command types are scored (although they can vary from team to team, scout to scout, etc):

His other grades would be strong, as he displays very good command, control, has strong poise and baseball instinct, not to mention a change-up that would score at minimum 60+, maybe even at 70.

Clearly Marcum can pitch and pitch well at the MLB level. But scouts, teams and pundits love the radar gun.

With such a low fastball grade from a righty, where do you think Marcum would go in the 2010 MLB Draft?