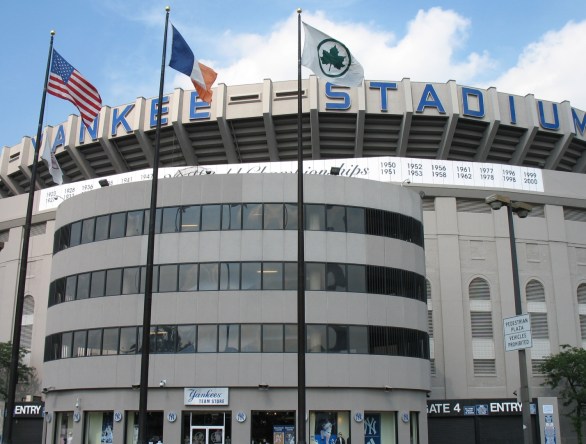 For the Labour Day weekend this year, Early and I decided to take a road trip to see the Jays play those damn Yankees before Yankee Stadium becomes a pile of rubble. On the way back, we decided to pass through Cooperstown and unleash our inner 12 year olds at the National Baseball Hall of Fame.

Before I get to Yankee Stadium, I have to get this out of the way. The roads in the state of New York are an atrocity. Pieces of random metal sticking out of the road in places, sinkholes, spots which were just neglected to be paved. It is worse than some third world countries I have been to. I felt the pang of imminent car repair bills in my loins and it was not a pleasant experience.

Okay, despite an unexpected detour through Harlem and Spanish Harlem (where we got to see the old Polo Grounds!!) we finally made it to Yankee Stadium.

We got there quite early with the hopes of venturing in to Monument Park but were still denied access which was a shame.  My initial impression of Yankee Stadium was….. that it is a dump.  To be fair, the ballpark is in fairly decent condition for an 85 year old ballpark.  It does make me appreciate the Rogers Centre a little bit more though.  But for all the talk of the history and the ghosts of Yankee Stadium, I never really felt it, certainly not compared to the history and nostalgia that permeated Wrigley Field when I was there.

Early and I sat in the upper deck on the 3rd base side and our sightlines were decent except for the fact we were unable to see the foul line area of left field and missed a few good looking catches.  The concourses were bleak and narrow, not at all like the shopping-mall-feel that is evident at the Rogers Centre. The Yankee fans were very passionate about baseball which was refreshing.  What I was most impressed with, however, was the courtesy shown to us visiting Jays fans.  Earl and I were not too stuck up to be “those guys” and get into it when it came to cheering for the Jays.  If we were in Toronto and the situation was reversed, we would have been swarmed and taunted mercilessly by drunken Jays fans.  In New York they politely allowed us to cheer for our team (except for one lunatic who was positively vibrating as the Jays clawed back into the game and won it).  All in all, it was a good day to be at the ballpark in the Bronx. Hot, sunny, beautiful day and cold beerzos flowing through the stands and a Jays win (7-6) to top it off.  I look forward to coming back next summer to see the ~new~ Yankee Stadium across the street. To see how Old Yankee Stadium stacks up against other ballparks we’ve reviewed, check out our Ballpark Review Roundup.

The next day we attempted to navigate through the landmines and out of New York City to make it to Cooperstown for the double-dip.  You see, if you hit up the Hall of Fame after 7pm, you can run around the museum all night and your price of admission includes the entire following day as well.

On the way there a big black bear ran out in front of my car and Earl and I almost shit our pants.  Other than that though it was a beautiful drive through rolling hills and fields of wildflowers.  My first impression of Cooperstown was that it was like that perfect town of Spectre from the movie Big Fish – everything was how I wanted it to be. Baseball bars, baseball memorabilia shops, a baseball bank – and it didn’t stop there. Earl and I stayed in the Baseballtown Motel, which was above a baseball nostalgia shop.

As soon as we checked in we were twitching to get to a bar that had the Yankees/Jays afternoon tilt and get some Rolling Rock into our bellies.  Oddly enough, we could NOT find a bar that actually had baseball on the tvs! They were televising COLLEGE SPORTS if you can believe it?! Imagine going to the Hockey Hall of Fame in Toronto and wanting to go to a bar and see a Leafs game but you can’t because they are showing Lakehead Vs. Queen’s women’s basketball? Unfathomable.

Anyway, we did end up finding a hole in the wall that had Rolling Rocks (not to mention Bud Light with Lime – they are awesome) and pap can (popcorn to us Canadians). After getting half a buzz on – okay, let’s be honest, a full buzz on – Early and I were let loose upon the Hall of Fame. Imagine giving two 12 year olds 2 beers each and letting them run around a museum. That’s what we looked like.

The first thing I saw was the Buck O’Neil exhibit and I was jumping around like Beavis having a seizure on Beavis and Butt-head.  Buck O’Neil became known to the mainstream baseball fan due to his colourful commentary in Ken Burns’ baseball documentary. I wrote an article about him here.

Next Earl and I went straight into the Hall where all the plaques of the members are. We went straight to the first class of inductees – Christy Mathewson, Babe Ruth, Ty Cobb, Honus Wagner and Walter Johnson.  That was pretty impressive. Next up I wanted to see Paul Molitor and Cal Ripken, but in my 12 year old mind I was struggling with making the decision between peeing my pants from the 8-9 Rolling Rock I had or going to the bathroom.  Luckily I chose going to the bathroom and surprise! still had at least 2 hours to see the rest of the exhibit.  Highlights included the aforementioned Paul Molitor and Cal Ripken, Ferguson Jenkins, Robin Yount, Phil Niekro (former Jay), Oscar Charleston, Martin Dihigo (El Maestro), Charlie Radbourne (Old Hoss), Jackie Robinson, Gary Carter (sporting the Expos cap), George Brett, Satchel Paige and Dave Winfield (former Jay).

We also sat in the old seats of Veterans Stadium and the Polo Grounds (maybe it was the Polo Grounds, I can not be sure on account of the haze.. Earl can provide confirmation).

The no-hitter baseball collection is quite impressive and, of course, my favourite was Dave Stieb’s (vs. the Tribe.. not saying anything.. just saying..). The World Series ring collection was quite interesting to look at as well, and surprising to see the biggest ring of all belonged to the Marlins.

Other highlights included the Latin American section (full exhibit to come Spring of 2009), the old old old time equipment (such as the first ball used in a triple play), satin jerseys, baseball cards and baseball artwork.

This had been my second trip to Yankee Stadium.  The first was in 2006 to see a mid-week series in August against the Jays.  That time the weather was atrociously hot and so were the Yankees who swept the Jays.
Yankee Stadium has a grand look about it.  Unlike other older ballparks I had been too such as Wrigley, Tiger Stadium and Fenway it is not nestled into the neighbourhood.  It stands out, it gleams white along the Harlem River across from FDR Drive.  The Bronx does not have skyscapers that Manhattan does and is mostly residential or industrial.  Yankee Stadium is a massive structure and is not to be confused with anything else.  And if anyone is confused the massive Marquee will straighten you out.Yankee Stadium is roomy, some seats, especially the centrefield bleachers are a long ways from home plate.  The sightlines seemed to have been be better before the renovation.  To my understanding, during the renovation homeplate was moved back 30ft or so.  from our seats in the upperdeck in left field we had to lean forward and crane our necks to be able to see infield.  But the sightlines were not poor by any means.From inside Yankee Stadium is a wall of seats.  The upper deck is steep and high.  The field level and the mezzanine were tucked under the upperdeck.  Where we were sitting there were many Blue Jays fans who had made the trip down from Southern Ontario.  One thing I liked about my previous visit was the Yankees were a first place team, the place was packed with rabid Yankee fans who are probably the most knowledgeable that I have ever seen.  The Canadians there, seemed like they should get a pat on the back for liking baseball and being in New York.  There were way too many “Souvenir” fans there.  Fans with t-shirts “I drove from Alaska to see Yankee Stadium”.  These sort of people diminished the Yankee Stadium atmosphere.

Unfortunately the Memorial Walk was closed nearly as soon as the Stadium gates opened due to capacity.

The next day we went to Cooperstown.  The country roads, black bear crossings and quaint colonial villages on a beautiful Sunday was the tops.  Seeing fellow mud.com contributor Callum finally be served sausage gravy after lusting for it since being in the US only to say, “Dammit, I didn’t know it was going to be white,” was a highlight.

We got to Cooperstown around noon and it is every baseball fans dream city.  Everything is all about baseball.  There really are not enough bars and the 1am closing time is a crock.

There was a senior amatuer game going on at Doubleday Field.  The players were terrible and there was a teenaged pitcher shutting down a squad that perhaps had never seen a curveball before.

Anyways, the Hall of Fame is very well done, I was impressed at how current everything was.  Recent milestones, highlights were already enshrined.  The tops of it all was the actual Hall.  The plaques and the stories they tell was something that I had read about since I was a boy.  I remember a book that my dad got for me from the library and it had pictures of the players plaques and I read it over and over and renewed it again and agian.  So much for bedtime stories huh?

The Hall of Fame is a must for any serious ball fan and any casual fan would enjoy Cooperstown as well.  Any ballfan should have seen the Yank before it closed.  I have a feeling the Yankees will never be same.  And the New Yankee Stadium will be nothing more than the “New” Yankee Stadium.