Initially, Jays fans assumed (or at least hoped) that this series would determine positioning in a potential AL East divisional battle or Wild-Card spot. Instead, the Yankees are in a battle for home field in the AL, and the Jays are relegated to fighting for 2013 draft positioning.

I may seem a little melancholy or even downright angry at this point. I’m not sure why. I had no illusions about the Jays making the playoffs this season. It was, in my mind, another stepping stone and building block towards a 2013 playoff run.

The game plans that I present are, in my mind, sound; The execution from the Jays offense has been downright terrible. Over the past ten games the Jays offense has averaged a paltry 2.8 runs per game. Borderline starters such as Iwamura and Cobb have dominated, Gose and Hech have been painful to watch, Mathis has been exposed with additional playing time and Rajai Davis has more twists and turns in the outfield than a summer blockbuster.

This upcoming series against the Yankees will, I hope, get the Jays back on track. Toronto gets to square off against two below average (at least in my eyes) right handed starters in Freddy Garcia and Ivan Nova. Will the bats show up?

What a positive segway! And now, optimal game plans against upcoming Yankee starters.

Garcia has had a long and storied career. He was a key piece in the Randy Johnson trade. He was an all-star inning eater for a few years in Seattle, eventually came back down to earth and settled in as a nice, if not overpaid, number three starter for the M’s and White Sox. Injuries, age, and decreased velocity led to Garcia bouncing around multiple teams during the latter portion of his career. He now eats innings for the Yankees. 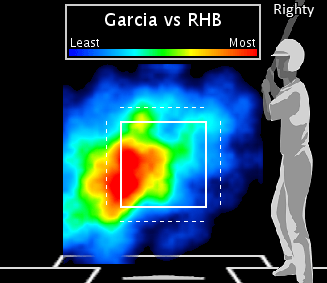 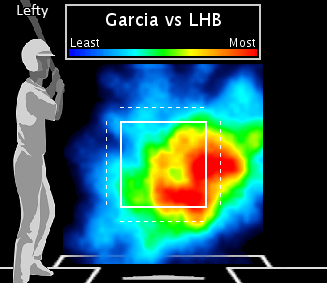 Garcia throws five pitches, leaning heavily on his fastball and slider. Complimentary offerings include a
change, curve, and splitter.

His average fastball velocity is near the bottom of all MLB RH starters at 87.5 MPH.  The pitch is very hittable, as he leads the MLB in ‘in play against’ on the pitch at 59.1%.

Like most pitchers with diminishing velocity, Garcia is vunerable at the top of the strike zone. This season he’s allowed a .310/.355/.491 line in the upper-half of the zone.

Jays Plan of Attack: Attack upper-half strikes and make Garcia pay for mistakes down the middle. By no means is Freddy Garcia a difficult match-up.

Due to simplicity, I am going to use one of the internets most hated baseball statistics: ERA

Nova has had one good stretch this season. The rest of the time he’s been sub-par. He’s a very hittable pitcher, allowing 160 hits in 138.1 IP. Originally thought of as a groundball specialist, Nova’s GB rate has dropped to 46.4% this season. In turn, his HR/FB rate has skyrocketed to 16.2%.

He throws a sinker, curve, slider to both RH and LH batters. He’ll also add in a change vs LH. His primary strikeout pitch is his slider, a pitch that he throws out of the zone, hoping to force chases: 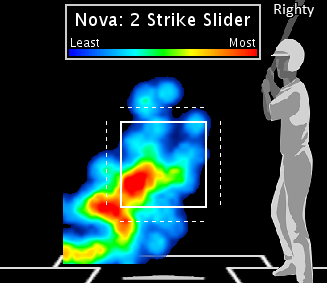 Jays Plan of Attack: Nova is very hittable. Be aggressive against fastballs, and be aware of later in count curveballs and sliders. If possible, do not chase. Make him come into the strike zone.

Hughes was terrible during the month of April. May, while better, was still below MLB average. Then he turned things around in June & July, allowing sub .300 wOBA against in both months.

He likes to work up in the zone with his fastball: 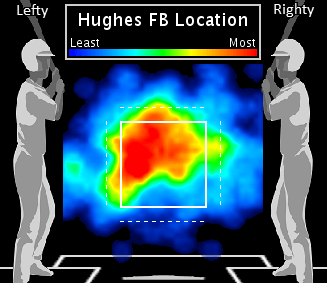 And down in the zone with his curve: 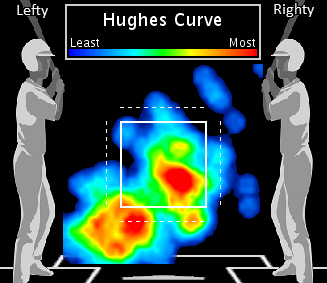 He also likes to get ahead in the count. In the second half of this season, Hughes has produced a 70.5% first pitch strike ratio, which is 5th highest in all of the majors (Colon and Cliff Lee are two of the pitchers slightly ahead of him).

Jays Plan of Attack: Don’t let Hughes get ahead on the 1st pitch: if it’s a hittable strike take a hack. Later in counts be aware of the high fastball, low curve combination. With this said, pitchers with higher end stuff can be predictable (see James Shields low change-up), yet still difficult to hit.