Currently the Blue Jays have a gaping hole at first base.  Adam Lind is in Vegas working on his conditioning and other “baseball issues“,  Edwin Encarnacion is best-suited to DH and David Cooper has never really put up the production required of a first baseman at any level.  With the release of Vlad Guerrero, here’s a look at a player that the Jays should take a flier on.

Over the past few years, there have been a few diamonds mined from the AAA Mexican League.  Joakim Soria, Alfredo Aceves and Toronto Blue Jays’ draft pick Roberto Osuna are a few examples of players who have gone on to play in MLB organizations from the Mexican League. This year, a player from the offensive side of a game is making a case for promotion to a higher level:  Barbaro Canizares.

The 6’1″ 220lbs. first baseman spent his formative years playing with Kendry Morales and Yunel Escobar for the famous Havana Industriales club in the Cuban National Series.  In his 8-year career in Cuba, Canizares played 520 games while hitting .303 with 38 home runs.  After leading Havana to a championship in 2005, Canizares defected (on his 4th attempt) and joined a Nicaraguan baseball team after establishing residency there.  Canizares dominated the low-level Nicaraguan league and the Atlanta Braves took notice, signing Barbaro as a non-drafted free agent. 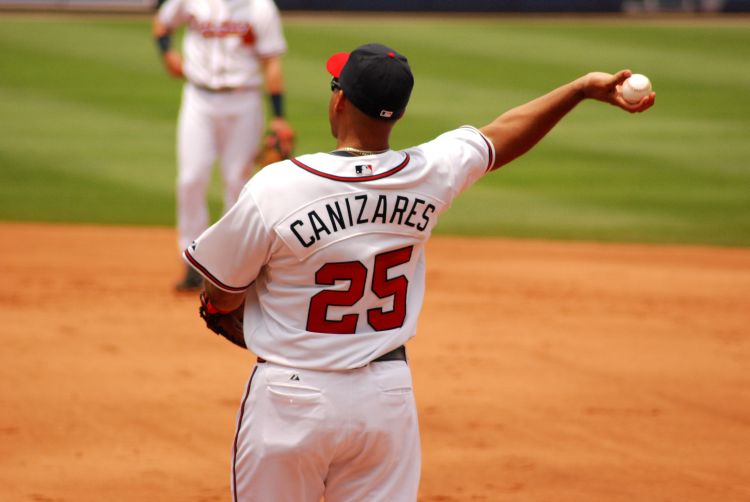 Canizares made his debut at high-A Myrtle Beach as a 26-year old prospect.  After only six games, Canizares was bumped up to AA Mississippi.  He posted decent numbers across the two levels and earned a promotion to AAA Richmond the following season in 2007.  It was at this time that Canizares ran into immigration/residency issues (similar to those experienced by Blue Jays prospect Adeiny Hechavarria); he only appeared in 46 games that season.  These complications effectively lost a year of development for Canizares. 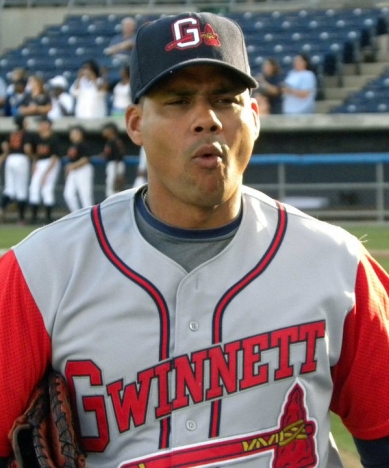 The next three seasons saw Canizares become more comfortable with the North American style of professional baseball – as well as the culture – and it began to show in his game.  Playing at the AAA level of Richmond and Gwinnett, Canizares put up solid but not spectacular numbers.  In his final season, Canizares hit .341/.403/.504 with 28 doubles and 13 home runs.  Jays fans’ view of the AAA level may be tainted from familiarity with the Jays’ AAA affilliate, Las Vegas and the cakewalk it is for slugging hitters.  Richmond and Gwinnett are not in the PCL like Vegas, but rather in the International League.  The IL is legit – most of the top prospects in baseball reside in the league; Canizares posted a .907 OPS in his last season there.  Regardless, feeling that Canizares didn’t provide the amount of power that is required at a corner infield position at the age of 30, the Atlanta Braves released Barbaro at the conclusion of the 2010 season.

Despite having just posted a .907 OPS at the AAA level, Canizares was not offered a minor league deal from any MLB club – not even an invite to spring training.  Like Kenny Powers before him, Canizares turned to his last resort:  Mexico. 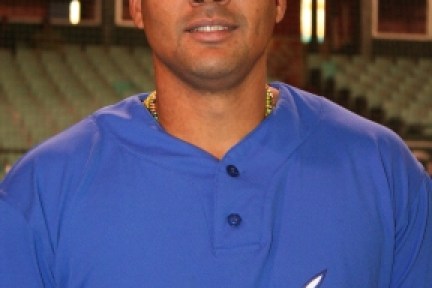 In 2011, Barbaro Canizares (that’s just a fun name to say, isn’t it?) joined the Yaquis de Obregon of the Mexican Pacific League.  The LMP is a winter league that plays on the west coast of Mexico and is of a slightly lower calibre of play than it’s AAA counterpart, the Mexican League. 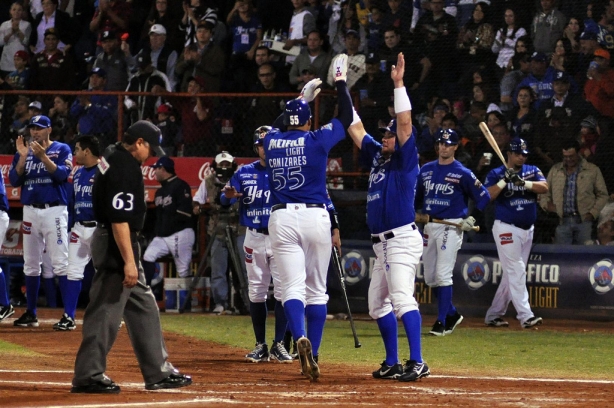 Canizares immediately set the league on fire.  He broke the record for most home runs in a season with 20, and he accomplished that feat in only 234 at-bats.  Barbaro led the Yaquis to the league title and the right to represent Mexico in the Caribbean Series. 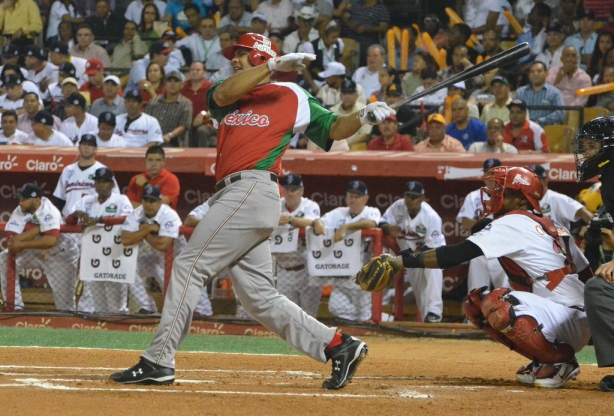 The Yaquis had a 4-2 overall record in the series and defeated the Mayaguez Indios of Puerto Rico to become ¡Campeones!

Having had such success in Mexico, Canizares endeavoured to keep his hot streak alive by signing with the Guerreros de Oaxaca of the AAA Mexican League for the 2011 summer season.  To say he experienced success would be an understatement.  Canizares led the league with a .396 batting average, posting an eye-popping .396/.499/.653 slash line.  Even more impressive was the fact he struck out only 41 times while working 61 walks.  What a stud!

To drive the point home that his performance in 2011 was not a fluke, Canizares is up to his old tricks again.  Back with Oaxaca for a second season, Canizares is smacking the stuffing out of the baseball like it is a piñata.  In only 244 at-bats, Canizares has ripped 17 home runs and 20 doubles.  Again, he’s walked more than he’s struck out: 50 walks to 41 strikeouts.  His slash line?  Yet another video-game-esque .352/.470/.643 for an OPS of 1.114.

What are we to make of Barbaro Canizares then?  Well, there’s a few different considerations one must take when evaluating the player.  Firstly, he’s a Cuban, and there’s a whole lot of baggage associated with that label.  The adjustment to life in the US – or any non-communist country, for that matter – is no small undertaking.  For some it takes less, for others it takes longer.  It could be that Canizares is just a late bloomer.

One of the comparisons that immediately comes to mind is the quintessential 4-A player, Randy Ruiz.  The difference between Ruiz and Canizares is that Ruiz strikes out in roughly a quarter of his at-bats, while Canizares has exhibited impeccable strike-zone judgement.  This fact means that Canizares will project to play better at a higher level than the free-swinging Ruiz; pitches will have a tougher time expoiting Barbaro’s weaknesses. 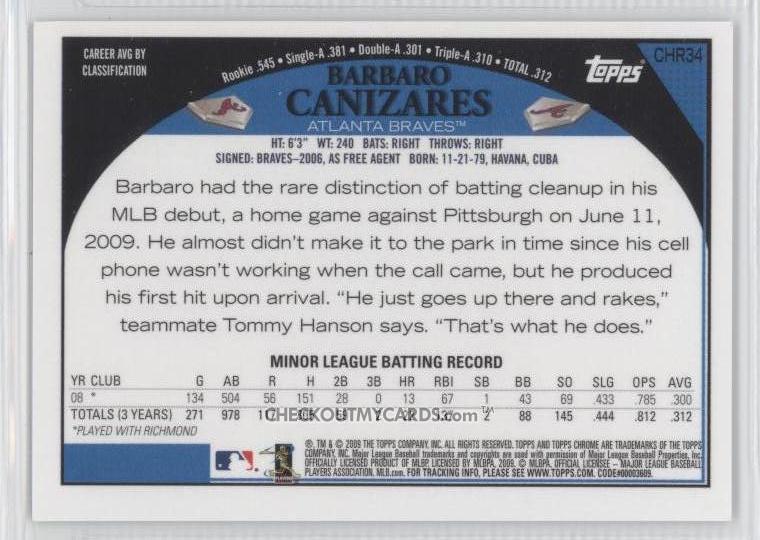 It’s highly possible that the 32-year old Canizares is the next Bryan LaHair.  Like LaHair, Canizares has performed at every level he’s been at, but for some inexplicable reason, he’s never been given a shot.   If he continues to play at the level he’s been at for the last two seasons, an MLB team will have to take a chance on him.

Of course, there is one caveat:  a player can’t be scouted on numbers alone.  A box score can’t tell me about a player’s defense, other than errors.  Will Canizares clog up the basepaths?  He is prone to grounding into double plays and is loathe to steal a bag.   With that said, I can’t see him being much slower than broken-down Vlad Guerrero.  What about his makeup?  Will he fit in with the meticulously-crafted Blue Jays team chemistry?  Does he have a strong work ethic?  Is he coachable?  What is his baseball acumen like?  All of these questions can only be answered from seeing Canizares play live and investigating his background.  With access to this type of information, I would have a clear picture of the type of player that Barbaro Canizares is.  Alas, I am just a lowly blogger and numbers are all I have.  Based on the limited information available to me, I can’t help but be tempted to find out what Canizares is capable of.

With the uncertainty surrounding the Adam Lind/David Cooper/Vlad Guerrero situation, why not Toronto?  With Canizares at first base, Edwin Encarnacion can slide back into the DH role – a role in which he is far more comfortable.  Speaking of comfort, Canizares would be able to play with fellow Cuban & former Industriale Yunel Escobar.

This is the kind of low-risk, low-cost, high upside move that Blue Jays’ General Manager Alex Anthopoulos is known for.  I’d love to see the “Silent Assassin” pull the trigger on this deal.